Architect Carlo Ratti is among a group of MIT researchers exploring the feasibility of fighting climate change with a conglomeration of "space bubbles" that would float above the Earth to reflect the sun's rays.

The Space Bubbles research project proposes floating a "raft" made of frozen bubbles at the L1 Lagrangian Point – the point between the Earth and the sun where their gravitational pulls cancel out.

The bubbles would be made of a thin-film material and manufactured in space where, when interconnected, they would cover an area roughly the size of Brazil.

Developed at the Massachusetts Institute of Technology (MIT), Space Bubbles is a variation on the common geoengineering idea of a solar shield, which would work by blocking out some of the incoming solar radiation to theoretically reduce the effects of global warming.

A key difference, however, is that with a space-based sun shield, there should be no risk of interfering with the Earth's biosphere. Projects deployed within the Earth's stratosphere do run this risk.

The MIT researchers stress that the Space Bubbles proposal was designed to supplement not replace current climate change mitigation efforts, but that the day may come when such an intervention becomes essential.

"Geoengineering might be our final and only option," said Ratti, who is the head of MIT's Senseable City Lab. "Yet, most geoengineering proposals are earth-bound, which poses tremendous risks to our living ecosystem."

"Space-based solutions would be safer – for instance, if we deflect 1.8 per cent of incident solar radiation before it hits our planet, we could fully reverse today's global warming." 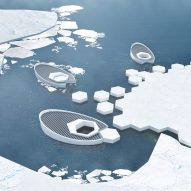 Another advantage of this particular solar shield is that it is reversible, as the bubbles could be deflated and removed from their position.

The spheres would be made from a material such as silicon, transported to space in molten form, or graphene-reinforced ionic liquids.

The MIT team carried out a successful preliminary experiment by inflating a spherical shell in outer space conditions, and believe it could be one of the most efficient thin-film structures for deflecting solar radiation.

The Space Bubbles research project builds on ideas by scientist James Early, who first suggested deploying a deflective object at the Lagrangian Point, and astronomer Roger Angel, who proposed the bubble-raft.

For now the project is a working hypothesis, but the interdisciplinary team are hoping to secure support for a feasibility study that would involve further lab experimentation and analyses.

As well as materials, the study would explore options for shipping the material from Earth, including whether it could use a railgun (a magnetic accelerator gun).

It would also look at positioning and stabilisation of the bubble raft, shading capacity, cost efficiency, maintenance and end-of-life transition, climate and ecosystem impact, and public policy implications.

The public policy questions include whether geoengineering presents a "moral hazard" by undermining support for climate mitigation policies and encouraging people to see the shift away from fossil fuels as less important.

Geoengineering has proven controversial, but the United Nations' Intergovernmental Panel on Climate Change has said it is a necessary Plan B if temperature rises can't be capped at a manageable level.

Mooted geoengingeering proposals include sucking carbon dioxide from the air, pumping gas into the stratosphere to reflect some of the sun's heat, brightening marine clouds to make them more reflective, and modifying the earth's albedo with white roofs or reflective coverings for deserts.