Designed for a single female occupant, the apartment is located on a five-block stretch on Bleecker Street within a restored late 1800s building that was originally designed to house the Schumacher and Ettlinger lithographic printing business.

The 348-square-metre three-bedroom apartment is split over two floors connected by a corten steel staircase.

The designers reorganised the space to emphasise the apartment's tall ceilings, oversized windows and natural sunlight.

To create better clarity in the space, the staircase that connects the two floors was also designed to separate the kitchen from the living room.

This monolithic piece is wrapped in a patchwork of welded corten steel produced by Brooklyn-based metal fabricator Gabrielle Shelton. 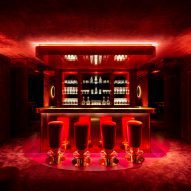 The studio also added a maple and glass wall that houses a Patagonia stone workspace and a display cabinet that showcases the client's vase and vintage crockery collection.

Patagonia stone was also used in the kitchen, while the apartment's walls were rendered in limestone and textured glass was chosen to dapple the natural light, creating a serene and calm ambience.

It was important to the studio and the client to work with local artisans like Shelton. Other locally-made pieces include the liquid metal bespoke bathtub and living area walls by New York-based atelier Courbet.

The reclaimed walnut flooring was sourced locally and an array of different metals in the kitchen, such as the blackened steel cabinets and brass cooker hood, were all handcrafted by local artisans.

The London studio previously created an office with a blood-red bar and all-blue cinema room for a BAFTA-winning game developer in Cambridge.

The photography is by Isabel Parra.