Design duo Studio Swine has displayed 22 hardwood furniture pieces on a "mountain" made from the packing crates they were delivered in for the Forest Tales exhibition at Milan design week.

The exhibition, which showcased furniture by designers including Ini Archibong and Maria Bruun, saw Studio Swine take advantage of the packaging that had been used to transport the pieces from elsewhere in Europe to Milan.

Studio Swine modelled the construction of the crate structure in advance, using computer-aided design (CAD) to form the display, which was described as a mountain.

The crates were then assembled in Milan, where they were decorated with water-based paint by the same painters who did the backdrops for Milan's famous La Scala theatre. After the show, they will go back into use.

"After the show, the crates are used to ship and store the furniture pieces around the world," Alexander Groves, who founded Studio Swine together with Azusa Murakami, told Dezeen.

"The idea is that – in the same way you can visit the forest and 'leave no trace' – we could make a no-waste show for Milan and leave no trace afterwards."

The crates had been produced over the past two years by workshops involved in four older projects, from which the furniture pieces for Forest Tales were chosen.

The past projects were made in collaboration with the American Hardwood Export Council (AHEC), which is also behind Forest Tales.

On top of the Forest Tales crates and next to them sit a number of pieces from these past projects, made from three different kinds of American hardwood: maple, red oak and cherry.

As inspiration for the illustrations that decorate the crate mountain, Studio Swine looked to historical engravings of American forests and aimed to give the images a "drawing-like" quality.

"In the US, the idea of the forest is steeped in romantic literary tradition and central to the cultural identity of America – whether that's in the heritage of the Algonquin tribe in the forests of upstate New York, the story of Rip Van Winkle in the Catskills, and the lives and work of Henry David Thoreau, Rachel Carson, Ernest Hemingway and others," Groves explained.

"These forests are a vital resource for sustainable materials, and an essential instrument of carbon capture, but they also occupy a place in the imagination that is equally important and often missing when you encounter wooden products," he added.

The installation was designed with the aim of being as material-efficient and "close to carbon-zero" as possible.

"With regards to the content of the exhibition, because these are all objects made predominantly from solid American hardwood, they are collectively very close to carbon neutrality," AHEC told Dezeen. 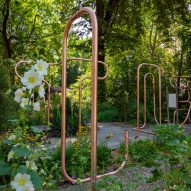 "We know this because, for each project, we collected processing data from the various workshops (in Australia, Malaysia, Germany, the UK, Portugal and Italy)," it added.

"So we know energy consumption and material inputs. Through AHEC's LCA (life-cycle assessment) work over the last 10 years, we also have accurate impacts for growing, harvesting, producing and shipping US hardwood raw material to any destination worldwide."

AHEC said that by combining this data, it can model a range of LCA impacts, including carbon footprint, for each piece.

"These hardwood objects not only have relatively low environmental impacts, they also have another huge advantage over other non-wood materials as they act as carbon stores," the company said.

"When the sequestered carbon is taken into account, many of the objects in the exhibition are carbon neutral or even carbon negative in some cases."

According to Studio Swine, the overall show doesn't create much waste as the crates will be reused and other materials were also chosen based on their sustainability.

"In terms of waste the show is very minimal," Studio Swine said.

"Spin Studio did the graphics and they chose stencil typography to enable us to use water-based paint on the walls and crates for the show captions to avoid vinyl. We selected a non-PVC vinyl for the captions that are on the floor."