The proposal, which was the winning entry of a recent competition, is set to be built partly over a road in the new Jinghe New City technology hub to the north of Xi'an.

Jinghe New City Culture & Art Centre will take the form of a series of meandering volumes, courtyards and outdoor areas used for cultural and recreational activities.

The curved forms were designed by Zaha Hadid Architects as a reference to the Jinghe River and the mountain valleys it has carved out in the area.

"Echoing the meandering valleys carved by the Jinghe River through the mountains and landscapes of Shaanxi province, the Jinghe New City Culture & Art Centre is located within the Jinghe Bay Academician Science & Technology Innovation district of the city," said Zaha Hadid Architects.

"Organized as a series of flowing volumes, layers and surfaces interconnecting with courtyards and landscapes, the design defines a sequence of interior and exterior cultural and recreational spaces for its community."

According to Zaha Hadid Architects, Jinghe New City was selected as the site for the project as it is a growing a hub for the energy, materials, artificial intelligence and aerospace industries.

Jinghe New City Culture & Art Centre, which will span eight lanes of traffic on Jinghe Avenue, will form part of a masterplan for redeveloping the area.

Accessed by gently sloping ramps, the building will also help connect the city's commercial and residential districts to the north with to parkland to the south.

Inside will be a multimedia library and flexible performing arts theatre, alongside multifunctional halls, studios and exhibition galleries. 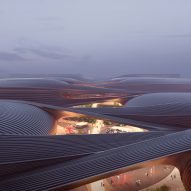 The part of the Jinghe New City Culture & Art Centre that spans the road will include elevated courtyards, gardens and paths.

Zaha Hadid Architects' design for the multimedia library will incorporate spaces for both traditional print publications as well as virtual reality technologies, which it said will "expand the boundaries of learning and enrich the exchange of knowledge".

Here, there will also be a series of terraces that look out over a skylit atrium and are dotted with a mix of private and shared reading and research spots.

The performing arts theatre, which will have a capacity of 450 people, has been designed to adapt to a variety of events.

It will share its public areas with the multifunctional halls, studios and galleries, which are planned around the theatre to help with accessibility and encourage collaboration.

The centre will also use photovoltaic panels to generate electricity on-site and incorporate facilities for rainwater collection and harvesting.

Zaha Hadid Architects is the eponymous studio of the late architect Zaha Hadid, which she founded in 1980. Today it is headed up by Patrik Schumacher.

Elsewhere in China, the studio is also developing the striped expansion of an exhibition centre in Beijing and a pair of supertall skyscrapers linked by planted terraces in Shenzhen.

The visuals are by ATCHAIN.