A striped roofscape that takes cues from tiled roofs in traditional Chinese architecture will characterise Zaha Hadid Architects' expansion of the International Exhibition Centre in Beijing.

The extension of the centre, located in the Shunyi District, will contain exhibition halls, a conference venue and a hotel, all arranged around a string of courtyards.

Zaha Hadid Architects' proposal was the winning bid in a competition for the expansion. It is intended to support the growth of the venue, which is close to the Capital International Airport designed by Foster + Partners.

"With its own station on Line 15 of the Beijing Subway, the International Exhibition Centre is located next to the city's Capital International Airport and has grown to become an important venue for conferences, trade fairs and industry expos attended by delegates from across the globe," the studio explained.

"Phase II by Zaha Hadid Architects will significantly expand its exhibition space, enhancing the city's position as a leading centre of knowledge and international exchange."

Once complete, Zaha Hadid Architects' design will be distinguished by its dramatic copper-coloured roofscape, which will be composed of a series of striped long-span roofs.

These are intended as a contemporary interpretation of the roofs seen in traditional Chinese architecture that are typically made from glazed tubular tiles.

The roofscape will also reflect the interior arrangement of the centre, in which the exhibition halls will be positioned in lines along the east and west of the building.

Meanwhile, the roof's lightweight, long-span construction will create flexible, column-free internal spaces below that can be quickly adapted for various events and exhibitions.

Dividing the exhibition halls on the east and west side of the building is a central north-south axis, which will be landscaped with shared courtyards and gardens.

Partially sheltered by Y-shaped bridges overhead, this axis is intended as a space for informal meetings, relaxation, cafes or outdoor public events.

The hotel and conference centre will be positioned towards the north end of the site, which is hoped to optimise the flow of people and reduce disruption to ongoing events. 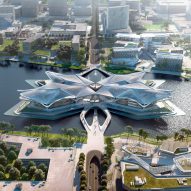 The expansion of the International Exhibition Centre will be complete with the installation of solar arrays across its roof to harvest energy, alongside rainwater collection points and greywater recycling facilities.

A "smart building management system" will also be incorporated to automatically adjust the centre's artificial ventilation and reduce electricity demand, which Zaha Hadid Architects says is among the building's features that "target minimum embodied carbon and emissions".

The extension of Beijing's International Exhibition Centre is among several projects in China being developed by Zaha Hadid Architects, the eponymous studio of the late British-Iraqi architect Zaha Hadid, founded in 1979.

This includes the Zhuhai Jinwan Civic Art Centre, a pair of supertall skyscrapers in Shenzhen and the Xi'an International Football Centre stadium.

Elsewhere in Beijing, it completed the 45-storey Leeza Soho skyscraper, which contains the world's tallest atrium.

Visuals are by Atchain unless stated.