Set in the Carré du Louvre, one of the main courtyards at the former Parisian palace, the show took place on 23 June and featured a collection designed wholly by Vuitton's studio team following Virgil Abloh's passing and his last collection for the house earlier in 2022.

PlayLab Inc built an oversized bright yellow toy racetrack with winding pathways that looped 360 degrees in front of the walls of the museum.

"A giant children's toy racetrack becomes a yellow-brick road for the imagination: an evolutionary path for the mind where childlike fantasies come to life," said Louis Vuitton.

"It's a transition from naïve to refined reflected in a collection that elevates the symbols of childhood through the savoir-faire of the Maison."

Giant red balloons, adorned with Louis Vuitton's LV logo, were placed across the courtyard on top of its cobblestone floor, which further exaggerated the show's childlike theme.

Hues of green covered the steps from the cobblestone floors to the "yellow brick road" runway, in which guests were seated in a single row that stretched along the walls of the racetrack.

Prior to models entering, a marching band procession from The Marching 100 began the show's proceedings followed closely by a band of dancing Louis Vuitton flag wavers. 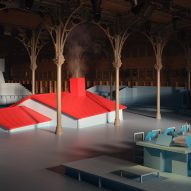 Abloh's signature codes crafted during his time at Louis Vuitton were still evident throughout the show.

Fabrics printed with tile motifs and leather garments decorated with reliefs of ornate French mouldings link to Abloh's architectural ties and the 18th-century interiors of the show's setting.

"The delicate floral paintings found in the ceilings of the same residence echo the cornices that define the palatial interiors of Parisian architecture," said the brand.

At this year's Milan Design Week, Alessi, Cassina and Abloh's own luxury brand Off-White launched products the designer had been working on before his death.

The photography is courtesy of Louis Vuitton.