LA studio PlayLab Inc. has incorporated surreal fragments of a home in the set for Louis Vuitton's Autumn Winter 2022 menswear collection, which was the final collection from the fashion house's late creative director Virgil Abloh.

Taking place on the 20 January in Paris at the Carreau du Temple, the 22 minute-show was an ode to Abloh's eight previous shows as Louis Vuitton's creative director – incorporating elements from each in a surrealist and whimsical medley.

Set within the Carreau du Temple, a 19th century-covered market in the 3rd arrondissement of Paris, the set was designed by Playlab Inc. The LA-based creative studio transformed the glass and iron structure into a monochromatic, sky-blue dream-like scape titled "Louis Dreamhouse".

"Imagining a metaphysical space of possibility, the Carreau du Temple in Paris is transformed by the wondrous architecture of the Louis Dreamhouse into a mind-expanding interior of ideas, prospects and encouragement," said Louis Vuitton.

The set was designed to show Abloh's final collection following his death in November 2021 after a battle with cancer.

"Within the wondrous architecture of the Louis Dreamhouse, the designer employs the Boyhood Ideology key to his philosophy: Seeing the world with the unspoiled eyes of a child," explained the collection's show notes.

"Through this lens, the membrane between reality and imagination is non-existent. Dreams can come true. Yet to be programmed with the grown-up, manmade notions of society – 'high or low', 'black or white', 'masculine or feminine' – the mind of a child knows no limits; no prejudice."

The show began with dancers moving throughout the whimsical set to a live orchestra that was seated at a vast Louis Vuitton monogrammed banquet table.

Across from the orchestra-occupied banquet setting, a house topped with a bright red roof and smoking chimney was half-sunken into the floor between the venue's gilded cast-iron columns.

Domestic settings fragmented from the red-roofed sunken home were scattered elsewhere across the interior of the former Parisian market.

In the corner of the venue, a staircase with a glowing arched opening – a reference to Abloh's Autumn Winter 2020 The Truman Show inspired-set – was the entry point where models entered the space. 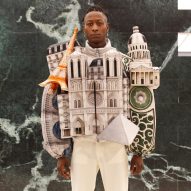 Guests were seated on pillows placed on top of rows of tiered seating around the perimeter of the venue.

The collection itself was a testament to Abloh's vision of subverted luxury and highlighted the codes he built for the Parisian fashion brand.

Accessories contained a similar surrealist message, with trunks and bags distorted and skewed in shape and featuring blurred and faded takes on the Louis Vuitton monogram.

"Imagine striking a spark of imagination that turns into an eternal flame: a guiding light to a new world illuminated by possibility, where the surreal becomes real and fantasy manifests in real life," said Louis Vuitton.

The collection was the final presentation from Abloh's time at Louis Vuitton, where he became its first Black creative director in 2018.

Abloh, who was the founder of luxury brand Off-White, was one of the world's leading designers. Following his death, numerous designers, including architects David Adjaye and Dong-Ping Wong, paid respects to the "fashion superstar".