Google is planning to purchase the 17-storey postmodern building in central Chicago as an office space for its growing team based in the city, according to Real estate publication CoStar Group.

Although the technology company has not confirmed the reports, it revealed that it was planning to expand its Chicago presence.

"Chicago continues to be an important and growing hub for Google here in the Midwest," said Google.

"As Google grows in Chicago, we'll continue to explore opportunities to ensure our physical space meets the needs of local Googlers."

Opened in 1985, the James R Thompson Center has been the office of the Illinois state government for the past 37 years.

Its future has been uncertain since the government's plans to sell the building were first made public in 2015, with fears that it would be demolished.

Recently Illinois governor Jay Robert Pritzker announced that the building will be sold to developer Prime Group, which will renovate the building.

German-American architect Jahn's former studio, Jahn, has drawn up designs to turn the office block into a mixed-use property. It is unclear how the discussions with Google will impact the renovation plans. 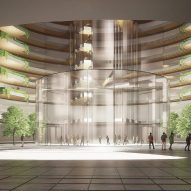 "The renovation is aiming for lowest common denominator of apparently good taste," said Owen Hopkins in an opinion piece on Dezeen.

A well-known postmodern landmark, the building was originally called the State of Illinois Center and renamed in 1993 to honour former governor James R Thompson.

Architect Jahn, who died in a bicycle crash in 2021, completed numerous buildings in his adopted home in Chicago including the United Airlines Terminal One at O'Hare airport.

His work was memorialised in a short film called Helmut Jahn: In A Flash by architectural filmmaker Nathan Eddy.

The imagery is courtesy of Jahn.