Northwestern University researchers have created a tiny, crawling robotic crab that they claim, at half a millimetre wide, is the smallest remote-controlled walking robot ever made.

The robot crab is smaller than a flea and capable of movements including walking, turning and jumping.

Its inventors from the USA's Northwestern University say it gives a glimpse into the future of robotics, when microscale devices could be used to perform tasks in tight spaces, including the human body.

"You might imagine micro-robots as agents to repair or assemble small structures or machines in industry or as surgical assistants to clear clogged arteries, to stop internal bleeding or to eliminate cancerous tumors — all in minimally invasive procedures," said engineer John A Rogers, who led the project.

The robot's tiny size is made possible because it has no complex hardware, hydraulics or electrical circuits.

Instead, it is made of a metal alloy known as a "shape-memory alloy", which means it changes shape when heated and then returns to the previous shape as it cools.

In the case of the robot crab, this change in temperature and shape happens quickly enough to generate a fast-paced walk.

To create the crabs, the researchers initially cut them from a flat sheet. They then cover these shapes with a stretched rubber substrate, which causes them to buckle into their intended three-dimensional form as the rubber relaxes. 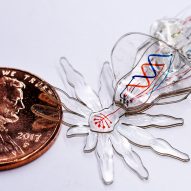 Spider-shaped tiny robot could be the future of micro-surgery

The researchers liken this process to turning the page of a children's pop-up book.

Then it is a matter of getting the crab to alternate between these two phases – the bent and the flat. This happens by targetting a laser beam at precise spots on the little robot's body, which makes that area heat up and seek to return to its initial flat shape.

A thin glass coating ensures that as that body part cools, it will once again spring back to the bent shape. According to Rogers, the robot's tiny size is an advantage when it comes to the rate of cooling.

"In fact, reducing the sizes of these robots allows them to run faster," said Rogers.

The heating process, which the researchers call "laser-induced local thermal actuation" in a paper published in Science Robots, is quite precise and produces a range of movement.

For instance, scanning the laser from left to right causes the robot to move from right to left. It can also turn around, twist and jump.

The researchers say they can build walking robots of almost any size and shape using these techniques and have already made alternate versions resembling inchworms, crickets and beetles.

Elsewhere, self-folding materials have been put to a different use, in "4D-printed objects" that start flat and assume their intended form when heated.