Vitra Design Museum has collaborated with the Tokyo Institute of Technology to relocate one of Japanese architect Kazuo Shinohara's last remaining homes from Tokyo to its architecture park in Weil am Rhein, Germany.

Vitra recently unveiled the house, which was originally built in 1961 in Nerima, Tokyo, and was set to be demolished to make way for a new road system.

After talks between the Vitra Design Museum and the Tokyo Institute of Technology, the home was safely dismantled in the summer of 2020 and shipped to Germany the following year to be rebuilt in its original design and to preserve its architectural legacy.

The 55-square-meter wooden home will serve as a venue for small gatherings and provide insights into a prominent example of modern Japanese architecture.

Additionally, the project aims to introduce Shinohara to the wider European public as his works, including Japan Ukiyo-e Museum, are not that well known outside his own country.

"Kazuo Shinohara is considered one of the most important Japanese architects from the latter half of the twentieth century, but is still little known internationally," said Vitra Museum. 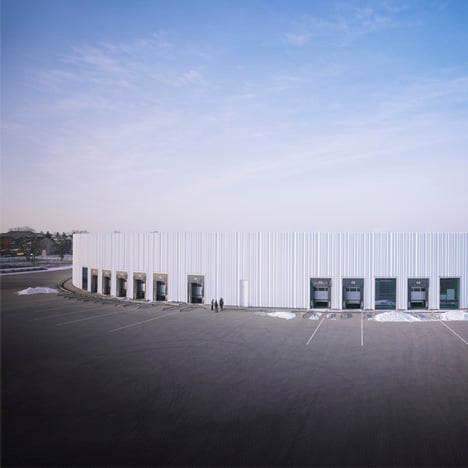 Factory Building on the Vitra Campus by SANAA

Shinohara won the Grand Prize 2005 from the Architectural Institute of Japan (AIJ) and in 2010 he was awarded a special commemorative Golden Lion in memoriam by the Biennale di Venezia board.

He formed the "Shinohara School" and four styles of design, addressing different challenges in architecture, which later influenced other architects such as Toyo Ito and Kazuyo Sejima.

Designed as part of his so-called "first style", the house is one of Shinohara's smallest and the last remaining residential projects.

"The Umbrella house made a novel and inspirational contribution to the architectural discourse of 1960s Japan," explained the Vitra Museum.

Shinohara drew on the traditional vernacular architecture of Japanese homes and included motifs from religious temples in the design.

He thought about the symbolism and its form in the context of Japanese tradition as well as about abstract geometries within the randomness of urban cities and how they together relate to an individual and residential architecture.

The home's distinctive roof was rarely seen outside temple complexes before it was built. The architect was also inspired by traditional Japanese art, including oiled-paper Japanese karakasas which then inspired the house's name; The Umbrella House.

"The strength of my conviction that A House is a Work of Art was born of the struggle with this small house," wrote Shinohara about the house for the Shinkenchiku Journal in October 1962.

"I wished to express the force of space contained in the doma (earthen-floor room) of an old Japanese farmhouse, this time by means of the geometric structural design of a karakasa."

Shinohara intentionally employed simple and inexpensive materials such as cement and fiber boards on the façade for quick and low-cost construction. This was an important point for the possibility of relocation.

Japanese cypress, Japanese pine and Oregon pine were used for the wooden structure which is a dominant aesthetic feature in the interior of the house due to the exposed "umbrella" roof spanning four meters in height.

Inside, the house contains a kitchen, living room, bathroom and a traditional tatami room that is raised with a flat ceiling.

The tatami room can be separated by sliding doors, fusumas, with prints made by Japanese artist Setsu Asakura based on Shinohara's specifications.

The original furniture was designed by Shinohara and designer Katsuhiko Shiraishi, the reconstructed house furnished with a mix of replicas and original pieces.

The now reconstructed Umbrella House is located near Herzog & de Meuron's VitraHaus, which is formed of a stack of elongated volumes with pitched roofs. Other buildings on the campus include a fire station designed by Zaha Hadid and a factory designed by SANAA.

Photography is by Vitra Design Museum