Greek architectural studio Kapsimalis Architects has designed a hotel in Fira on the island of Santorini using entirely vegan materials and fittings.

Named Ethos Vegan Suites, the small hotel occupies a typical, 20th-century house in the Santorini capital, which was entirely renovated by Kapsimalis Architects.

The hotel, which has five suites, was designed around an "eco-friendly, cruelty-free, vegan approach concept". It also has a reception room and kitchen, which serves vegan food for the guests.

"We aimed to incorporate the use, characteristics and principles of vegan hospitality throughout the hotel," said Kapsimalis Architects co-founder Marianna Kapsimali.

The hotel was built using vegan, recyclable and locally-sourced materials and furniture.

Interior walls were lined with hemp, sand and cobs, while the building is furnished with ceramics, oak wood and linen.

"The core concept of the design was to utilise and improvise the existing building's structure in the dense village of Fira, which had undergone multiple changes and additions through time," added Kapsimali.

The owners chose the building for its structural integrity, suitable layout and the typical characteristics found in the island's architecture following the 1956 Santorini earthquake.

As part of the reconstruction, the building's appearance was stripped for a simplistic look that aligns with the cubist architecture in Fira. 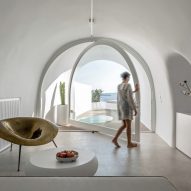 Hotel on the Santorini coast has rooms in white-painted caves

Parapets, cornices and walls were all removed from the structure to create the clean lines used in Greek architecture.

A range of ceramic claustra was used to build perforated walls that allow natural light to spread across the hotel, as well as create semi-private areas.

"As the building belongs to the traditional village of Fira, while parts of the area have been altered during the last few decades, we wanted to improvise the initial geometries and to create a plain form, integrated into the original cubistic structure of the village," said Kapsimali.

At the entrance to the building, there is a semi-outdoor area that serves as a welcome space to the hotel.

The terrace is also used to grow vegetables and herbs which are served in vegan meals for guests, and has a view over the east of the island and the sea.

"We achieved a biophilic, bioclimatic and sustainable space by using a contemporary and energy-efficient building, insulation materials and technology that reduces energy consumption," said Kapsimali.

"We also used natural and recyclable materials, plants and greenery, the addition of water features, and the assurance of natural light and fresh air."

Other projects from Kapsimalis Architects featured on Dezeen include a monolithic holiday home, an island retreat and fortress-style house.

The photography is by Yiorgos Kordakis.