Local studio Kapsimalis Architects has created Monolithus, a holiday home on the Greek island of Santorini that was designed as an arrangement of geometric forms clad in earth-coloured cement.

Located outside the village of Finikia, the design of the four-bedroom dwelling was informed by the concept of a large piece of volcanic rock that has been eroded over centuries to carve out spaces.

The resulting "man-made monolith" is a 20 x 20-metre concrete block, cut through by an angular arrangement of yards and patios shaded by high walls that divide a series of guest houses.

"The artificial massive stone looks as if it has been there from the start, as a piece of volcanic eruption, shaped by the elements of nature, the sea and the wind," described the studio.

"Natural erosion exposes formations of solid mass and voids, and the gradual process of the stone's removal creates enclosed and outdoor living spaces," it continued.

Siting atop a square base, two guest rooms with kitchenettes alongside the primary residence form a V-shape that opens out towards the north, with each space connecting to private patios that end in small, individual pools.

Steel columns support perforated metal canopies that shade seating areas alongside these pools, while an outdoor seating area sits nearby in a sunken circle paved with cobble stones.

The main living and dining room to the west is wrapped by a larger terrace that connects to the front of the home, where a staircase leads down to a subterranean lounge space. 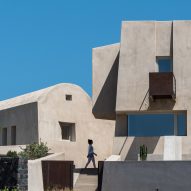 Above, a curved, "eroded" form houses an additional bedroom with a vaulted roof, which is connected to an elevated terrace looking out over the surrounding landscape.

Inside, spaces have been designed to feel like cavernous shelters, with white, angular walls that were also designed to look like spaces that have been carved out of a monolithic rock.

"Pieces of handmade furniture made from concrete, black stone, marble, wood, iron, velvet, clay and glass are diligently placed in the interior and exterior spaces," said the studio.

"During the summer period and under the blinding sun, the guests use the small water pools to keep cool on the perimeter of the monolith, surrounded by wild spiky mediterranean plants," it continued.

Kapsimalis Architects has designed numerous holiday homes on Santorini, often informed by the traditional architecture and natural landscape of the Greek island.

Previous projects include a fortress-style holiday home designed to look like a rocky outcrop and a series of holiday homes occupying converted caves.