A mixture of curved, pitched and sawtooth roofs creates different spatial qualities in the classrooms of this school in Deyang, China, designed by Beijing-based studio Trace Architecture Office.

Instead of adopting the tall, high-density approach of the surrounding developments, the school was designed as a "mat building" – a large, low-rise complex organised on a grid to allow ample light into all its skylit spaces.

"Most traditional classrooms are vertically distributed and can only get limited natural light from side windows," said the studio.

"Based on students age and learning styles in different grades, we designed six types of roof for each, creating rich spatial experiences which are relaxing or serious, lively or intense," it continued.

"With various roofs which are rhythmically organised, the overall appearance of the school is like a cluster of huts in fairy tales."

The plan's grid sees each classroom block organised around a courtyard that connects its two storeys, with a variety of different staircases and structures in wood, metal and concrete that make each external space unique.

Circulation was provided by paved paths through small gardens at ground floor level, and elevated walkways and bridges connecting classrooms above.

"Elevated courtyards are laid out in each grade group, which are convenient for students to enjoy running and looking up at the sky during break time," explained the studio.

"The courtyards become nodes of interaction in different grade groups." 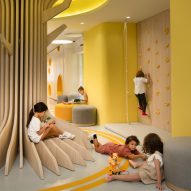 The classroom blocks face the central football pitch with large, concrete staircases, which provide direct access to the upper level and double as grandstand seating for watching games.

Opposite, the four-storey accommodation block to the west sits alongside an indoor basketball court and auditorium.

While the classrooms have been built using a steel frame, finished with minimal white render and zinc roofs, the accommodation and auditorium are built from reinforced concrete with flat roofs.

Inside, the classroom interiors have been simply finished in white, with sculptural ceilings that reflect the different roof shapes, with steep angles and sweeping curves that draw light downwards.

"It is our wish that this school could be just like a city, breeding imagination, freedom and miracles," concluded the studio.

Trace Architecture Office's previous projects include a theatre complex in Hebei province featuring a stone amphitheatre, and a bookshop and cafe inserted into an abandoned house in rural China.

The photography is by Schran Images.