Limestone blocks and crushed earth feature in this electric bike shop in Paris, designed by local studio Ciguë to visualise how a car-free city of the future might look.

The store belongs to Cowboy, an e-bike brand aimed at urban cyclists, and is located in the department store Le Bon Marché Rive Gauche.

For its interior, Ciguë designed a minimalist landscape that is "organic and fluid, free from the angst-inducing presence of cars".

Walls and ceilings throughout the space are covered in raw earth while on the floor, a winding concrete walkway reminiscent of a cycle path is surrounded by crushed earth. Roughly hewn blocks of limestone serve as seating.

One of Cowboy's bikes is suspended above a circular pit of crushed earth in the centre of the store, so it is visible from the street through one of the store's three street-facing windows.

Overhead, a screen shows footage of clouds streaking across the horizon to create the impression that the bike is "suspended between earth and sky".

As the outpost in Le Bon Marché is Cowboy's first shop without direct access from the street, Ciguë wanted to create an immersive interior that makes customers feel as if they are outdoors.

"We had to reconnect the shop with the exterior," said Ciguë founder Alphonse Sarthout.

"Videos of the sky conjure up the idea of movement and the passage of time. Similarly, suspending the bike in mid-air contributes to the idea of speed and effortlessness associated with electric bikes." 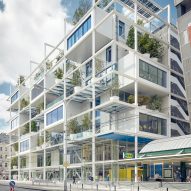 The bike is suspended using subtle wires while other models are displayed throughout the space using narrow aluminium stands, which create the impression that the bikes are standing upright of their own accord.

These pared-back displays were intended to reflect the seamless design of Cowboy bikes.

"The absence of visible welds and the materials used for the bike are embodied in Ciguë's display," said Cowboy founder Tanguy Goretti. "The interplay of textures on the walls, the benches and the aluminium rack reflects this tactile technology."

The warm-toned earth used throughout the interior was sourced from the Oise region of northern France.

This could become a consistent feature across other Cowboy stores in the future, according to Ciguë, with different earth tones being used for different locations.

Other retail environments designed by the Parisian studio include a bamboo-covered boutique for Isabel Marant in Bangkok and five different Aesop shops, among them an outpost above a record store in Nottingham.

The photography is by Maris Mezulis.