Finnish interiors studio Fyra has fostered a "bohemian ambience" in this hotel in Helsinki by layering different styles, colours and historical references within its public spaces.

Hotel Torni was originally built in 1931 based on designs by architects Jung & Jung, with its 13 storeys making it the tallest building in Finland at the time.

Over the years, it became a base for spies during world war two and a favourite meeting place for artists, journalists and other cultural figures including Finnish composer Jean Sibelius and writers Mika Waltari and Frans Eemil Sillanpää.

"The aim was to create surprising but elegant elements that respect the building's original architecture and historic values," said Fyra.

"Although most of the building's original art deco features had been removed over the years, the marble walls and floor in the entrance, a grand fireplace in the Cupola Room and a pair of doors in the restaurant were still intact."

"In our design, we did a modern interpretation of that era," Fyra told Dezeen. "But we did use some typical features of art deco."

This includes coloured ceilings, tubular chrome furniture and graphic floor tiles, as well as bespoke light fixtures with glass orbs in the lobby.

The historic Ateljee bar on the 13th floor offers views over Helsinki's rooftops in four different directions and was originally only accessible via a narrow spiral staircase.

But as part of the renovation, the bar was extended onto the 12th floor with its two levels connected by an elevator to improve accessibility and expand capacity.

Fyra's design team, led by Emma Keränen, Silja Kantokorpi and Eva-Marie Eriksson, furnished the space using reflective surfaces such as stainless steel counters so that the interior would maximise the panoramic views instead of competing with them. 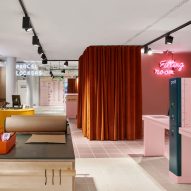 Hotel Torni's restaurant OR is located at street level. Here, the design team layered different styles of furniture, bold colours and artworks to create a "bohemian ambience" that would reflect the building's history.

The American Bar was restored to its original location under the hotel's central dome. At its heart sits a circular bar counter, atmospherically lit from above, that echoes the shape of the dome.

For this space, the designers chose a palette of dark green and marble, complemented by lamps from Finnish industrial designer Paavo Tynell.

Founded in 2010, Fyra specialises in designing work environments, hotels, restaurants and retail spaces such as this stylised bright-pink parcel collection point in Helsinki.

Last year, the studio was named interior design studio of the year at the Dezeen Awards.

The photography is by Riikka Kantinkoski.