Automotive company Volkswagen has launched a fully working prototype for an automated flying car, an electric vehicle that the company describes as a "state-of-the-art passenger drone prototype".

Nicknamed the Flying Tiger, the vehicle is Volkswagen's first venture into aircraft design.

Officially called VMO but dubbed the Flying Tiger due to its black and gold livery, the electric vertical take-off and landing (eVTOL) prototype looks similar to a helicopter, with eight rotors fixed upwards to allow the aircraft to take off and land vertically.

Two rear propellers enables the electric aircraft to fly horizontally on its journey.

Its cross-shaped wing configuration measures 11.2 metres in length and spans 10.6 metres in width. The electric aircraft's black-and-gold design was created to commemorate the fact that it launched in the Year of the Tiger.

According to Volkswagen China the four-seated vehicle, which is being developed by its vertical mobility team, is "already capable of much more than just hovering above the company parking lot".

When complete, the brand is aiming for the eVTOL to be able to travel up to 200 kilometres per hour with a maximum flight duration of 60 minutes on a single charge.

Volkswagen Group China said the first eVTOL will be suitable for "urban elite" Chinese customers. Initially, the vehicle could be used for services such as VIP air taxis.

"Our vision is for a private eVTOL that will serve the growing urban elite who will be travelling between Chinese megacity clusters for business and leisure," Volkswagen China's project manager and product owner Zhou Jin said.

"So, in the first phase of its commercial use, VMO is likely to be pitched as a premium product for high-net-worth individuals, for example for VIP air shuttle services," Jin continued. 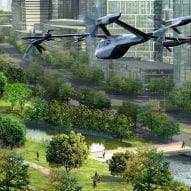 Flying cars will be in cities by 2030 says Hyundai chief

Like a number of other passenger drone prototypes, the Flying Tiger would be self-piloted. According to Jin, this is to make flying and navigating the skies easy for passengers.

Passengers can sit in a small cabin under the vehicle's wings, far away from the noise of the propellers.

"We are headed towards a world in which everyone will be able to operate aircraft, even without a pilot's license," Jin said.

"The key to making this possible is automation and remote control so that passengers only need to select a destination while the vehicle's systems take care of guidance and ensure their safety."

Volkswagen China is currently conducting flight tests on the prototype, with the hope of releasing an updated prototype in the summer of 2023.

The quest to create to commercialise flying taxi services has been building in recent years, with Boeing's self-piloted passenger drone completing its first test flight in 2019 and Hyundai and Uber's flying taxi service concept being showcased at last year's the Consumer Electronics Show.

A number of car companies are moving into the flying car market, including Chinese electric vehicle manufacturer XPeng and Aston Martin, which has designed a flying hybrid-electric vehicle.

Images are courtesy of Volkswagen Group China and Tangerine.