Occupying a site next to Taipei's popular Shilin Night Market, the 59,000-square-metre performance venue was opened by the city's mayor, Ko Wen-je, on Sunday 7 August.

The three venues are the spherical 800-seat Globe Playhouse, the 1,500-seat Grand Theater and an 800-seat multiform theatre for experimental performances called the Blue Box.

The Grand Theatre and Blue Box can also be combined to form a fourth venue – the giant 2,300-seat Super Theater.

TPAC was designed by OMA to challenge traditional theatres and "inspire productions in unimagined and spontaneous forms".

"When we first visited Taipei for the competition, we felt it was a city with an appetite for experiment," explained OMA's founder and project lead Rem Koolhaas.

"This building is a response to that discovery. We put three traditional theatres together in a way that offers theatre makers completely new opportunities to conceive spectacles and performances."

OMA won a competition to design the long-awaited complex in 2009 with Taiwanese design studio Kris Yao Artech. It was commissioned by Taipei City Government to support local performing arts groups.

Completion was originally planned for 2013, but construction did not begin until 2012 and the building topped out in August 2014.

The arts centre opened on Sunday with a performance by Taipei Symphony Orchestra, kickstarting a season of 37 productions scheduled across the three theatres.

Another key element of the building is the Public Loop – a walkway that runs around the theatre’s production and backstage areas. 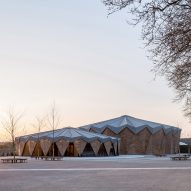 Open to the public whether or not they have a ticket for a performance, the walkway is lined with portal windows that provide views into areas that are often hidden from view.

To help the building form part of the city, a landscaped plaza has been positioned beneath the building. This acts as an additional stage for performance and as a space for the public to gather.

"The theatre culture and the vibrant street culture coexist in this public building and around the site," said OMA's managing partner David Gianotten, who led the project with Koolhaas.

"For us, this mix of cultures aptly captures the energy of Taipei, a city always open to changes."

OMA, known formally as Office for Metropolitan Architecture, was founded in Rotterdam in 1975 by Koolhaas with Elia Zenghelis, Madelon Vriesendorp and Zoe Zenghelis. The studio also has offices in New York, Doha, Sydney, Hong Kong, Beijing and Dubai.

The opening of TPAC follows the studio's recent announcements of its plans to transform a derelict bakery in Detroit into a gallery and create a series of interlocking towers on Miami Beach.

The photography is by Shephotoerd Co. Photography unless stated otherwise.