Paris-based design studio Golem has created the OoOoooOoooOh la l'ice necklace that is made from ice cubes and melts within 30 minutes.

Designed by Golem in collaboration with Laila El Mehelmy, the necklace aims to celebrate the value of water and was created to be worn frozen before melting after half an hour.

The designers developed the necklace during this summer's heatwave in Berlin.

"The idea came during a hot 24-hour party in Club Der Visionaere, Berlin," studio founder Ariel Claudet told Dezeen. "In a survival move to overcome the crushing heat of one of the hottest summers Germany has ever experienced, partygoers started to grab ice cubes from the freezers and rub each other with it."

According to the designers, the piece shows the increasing value that water is developing due to increasing temperatures across the globe.

"At a time when water sources are being privatised and water scarcity is striking all countries across the globe, water is turning from an overlooked commodity into one of the most sought-after luxury goods," Claudet observed.

The necklace comes with a custom-made silicone tray that allows the wearer to freeze it on demand. After being taken out of the freezer tray, the necklace features seven ice cubes linked by solid silver beads.

Larger beads mark the centre of where each ice cube sits. 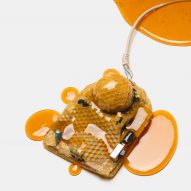 Designers make desktop computers and mice out of honey and ice

The studio found that the cubes melt after around 30 minutes on warm skin or an hour on top of a garment.

"This process induced by the heat from the wearer's body reflects the human impact on natural cycles," the studio commented. "It shows how humankind acts as a catalyst to natural processes and dangerously accelerates global warming and desertification."

When not frozen, the necklace can be worn as a regular silver-beaded necklace or a choker.

"When worn as a simple solid silver necklace, the larger beads mark where a water gem once stood and where a new one will one day solidify again," said Claudet. "It was important to us that when not frozen it is still a beautiful piece."

"We like the idea of the wearer appropriating the piece," Claudet continued. "A client from Greece told us she will use cocktails instead of water so people would gather and lick her body while she dances in Mykonos. Another client from Albania had us explain to a 3 Michelin star chef how to use it so it was brought for dessert on a silver tray as a gift for a friend of his."

Other necklaces featured on Dezeen include a necklace made from discarded pistachio shells by Belle Smith and Katarina Hornwall's chain with a metallic pendant designed to hold menstrual products.

The photography is by Guillaume Blondiau.