Architecture studio ZN Era has envisioned a skyscraper called Downtown Circle, which would be built around the Burj Khalifa in downtown Dubai.

Set to be 550-metres tall and 3,000 metres in circumference, the skyscraper would be composed of two interconnected main rings that will house residential, public, commercial and cultural spaces.

The structure would wrap around the tallest building in the world, the Skidmore, Owings and Merrill-designed skyscraper Burj Khalifa in downtown Dubai.

ZN Era calls Downtown Circle "a continuous metropolis" and believes it would provide a solution to the rapid urbanisation and population growth in Dubai.

"The proposed megastructure offers an alternative to the singular and unconnected high-rises found in most metropolitan areas," said the studio.

"With a circumference of 3,000 metres, the downtown circle functions as a continuous metropolis which is flexible and forward-looking."

The mixed-use skyscraper would be broken down into smaller units that include offices, houses, apartments and research centres.

A green layer would be sandwiched between the rings, which the studio refers to as the buildings' "green lung". 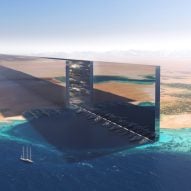 "As a response to the dilemma of how to build densely while retaining liveability, the downtown circle project establishes a sustainable and a self-sufficient vertical urbanism," ZN Era said.

"In order to give back to the natural environment, the plan includes proposed areas for rainwater harvesting and solar power," it continued.

"As an integral part of the urban ecosystem, the design also stores carbon and filters pollutants from the air, in addition to providing sanctuaries for wild plants and food production."

In the Skypark, residents would be able to traverse canyons, dunes, swamps and waterfalls. It would be designed to connect people to nature and encourage a healthier, outdoor lifestyle.

A transport system running along the outer ring of the megastructure would be designed to connect passengers across the metropolis within a fleet of pods.

Rising population growth and urbanisation in cities across the world has prompted other architecture studios to design futuristic urban centres including The Line, a 170-kilometre-long mirrored skyscraper that will house nine million people near the Red Sea.

Danish architect Bjarke Ingels and his studio BIG are masterplanning Telosa, a city for five million set to be built in the US desert.

The images are courtesy of Pictown.