Architecture studio BIG has collaborated with jewellery company Georg Jensen to create a necklace for Queen Margrethe II to mark her 50th Jubilee.

Made from sterling silver, the necklace was designed as a "miniature representation" of a temporary installation being built in the Kongens Nytorv square in Copenhagen to mark the occasion.

"Our internal nickname for the 50 Queens exhibition was always 'the necklace' so it was natural for us to turn the exhibition into a real necklace, as a miniature representation of the large-scale exhibition," said BIG partner David Zahle.

"It will be the only physical evidence of the temporary exhibition and will thus be part of history for years to come."

The necklace will be gifted to Queen Margrethe II, who was crowned in 1972, today at the opening ceremony for the exhibition, which will be in place until 18 September.

Created by Zahle in collaboration with BIG partner Giulia Frittoli, the installation that the necklace is based on consists of 50 pedestals that will each represent a significant Danish woman. 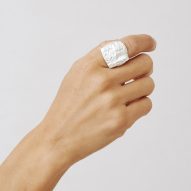 The necklace was made from 50 blocks of sterling silver of various sizes that each represent one of the pedestals.

The words 50 Queens were engraved on the largest block.

The piece was made by Georg Jensen using sketches initially created by the architecture studio.

"The silver blocks can be seen as miniature pedestals, each representing a stepping stone for women in history, while the design in its entirety symbolizes the passing of time," said Georg Jensen creative director Ragnar Hjartarson.

"Design collaborations are a long-lasting tradition at Georg Jensen – we have worked with many designers and architects, and we are proud to have had the opportunity to work so closely with Bjarke Ingels for this special occasion," he added.

The first female monarch of Denmark since the 15th century, Queen Margrethe II has ruled for 50 years since 1972.

Founded in 2005 by Danish architect Bjarke Ingels, BIG is one of the world's best-known architecture studios. It recently completed a cantilevering housing block in Amsterdam and is designing a "flood-proof" floating city called Oceanix Busan.