Dutch designer Boudewijn Buitenhek has built his own solar-powered kettle and coffee-bean roaster, in an experiment that saw him live in an apartment without mains gas or electric for a week.

Buitenhek wanted to explore whether clean energy could be harnessed by people living in rented apartments without access to a rooftop, instead of exclusively by homeowners.

He completed the project, called Living with the Sun, as part of his studies on the industrial design masters programme at KABK in The Hague.

"In the Netherlands and many other countries, we are currently experiencing a complex transition towards the use of alternative, more sustainable energy sources," said the designer.

"Individuals are partaking in this transition by installing solar collectors on their rooftops. However, this way of living is not affordable and accessible to everyone."

To understand the full extent of his daily energy use, Buitenhek cut off his supply of gas and electric for seven days, and restricted himself to using only energy he could generate from sources within his home.

"Going into the experiment, I prepared myself for cold showers and canned food," he said.

"However on the first day of the experiment, I realised I wasn't even able to make something as mundane and seemingly simple as my usual hot cup of coffee in the morning."

Initially his only sources of energy were a flexible solar panel – which he would move around his balcony to follow the sun's path – and a pedal-powered generator. But he quickly realised that neither were efficient at heating water.

This led him to explore the use of evacuated tubes, a solar heating method discovered in the 18th century by Swiss scientist Horace-Bénédict de Saussure.

This consists of a two-layer system of glass tubes. The transparent outer tube allows sunlight inside with minimal reflection, while the inner tube is coated in a solar film that converts sunlight into heat, warming water contained within.

Heat loss is reduced thanks to a vacuum between the tubes, so water can be effectively heated above 200 degrees celsius. 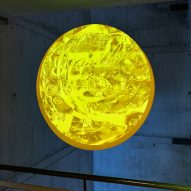 The Energy Show explores the past and future of solar energy

"This method of capturing solar energy not only enabled me to boil water for my coffee," said Buitenhek.

"After more experimentation, I determined that these tubes could also be used to roast raw coffee beans, another energy-intensive process. The combination of the solar water boiler and solar coffee bean roaster enables me to make a fresh cup of coffee on a sunny day."

Buitenhek's custom-built solar kettle and coffee-bean roaster are on show as part of The Energy Show, an exhibition at Het Nieuwe Instituut in Rotterdam showcasing the design possibilities offered by the sun.

The designer used these devices to make his morning coffee every day for a month, to see how it would affect his daily habits.

He found himself planning his day around the movements of the sun, so his coffee time shifted from first thing in the morning to approximately 2:30pm.

"On a sunny day, the water boiler heats up to boiling temperature in between one and 1.5 hours," Buitenhek explained.

"The coffee bean roaster requires preheating the empty tube to 200 degrees celsius first, which also takes between one and 1.5 hours. At that point, the beans go in and roast for approximately 30 minutes.

While Buitenhek acknowledges that his devices aren't feasible for the majority of people living in rented apartments, he hopes to how that rooftop solar panels are not the only way of harvesting clean energy.

"I'm trying to empower people that, like me, don't have their own roof or the funds to invest in large rooftop solar systems, to experience the joy of harvesting the sun's energy," he said.

"I believe that getting a better understanding of the relationship we have with the energy we use to power our lives is an important step towards living more sustainably."

The photography is by Boudewijn Buitenhek unless otherwise indicated.