A team of University College London researchers, led by Bartlett professor Priti Parikh, has developed an open-source calculator that allows those travelling from the UK to Egypt for COP27 to assess, reduce and offset the carbon footprint of their journey.

Designed to be free and easy to access, the calculator comes in the form of a spreadsheet that determines the emissions associated with different routes and forms of transport to Sharm el-Sheikh, Egypt, so travellers can make an informed choice.

The project is a response to the widely publicised news that last year's COP26 in Glasgow had the largest carbon footprint of any Conference of the Parties (COP) to date – with 75 per cent of this down to international flights.

"It's obscene to think about all these climate conferences and how many emissions are produced as a result of travel," Parikh told Dezeen.

"There is, therefore, an ever greater imperative to measure, minimise and offset the carbon footprint of COP to ensure that those attending the conference, in working to combat climate change, do not inadvertently exacerbate it."

Attending virtually generates less than one per cent of the emissions

In line with this call for transparency, all of the data behind the calculator is made publicly available, breaking down everything from the electricity consumption of local rail networks to the different types of jet engines, fuels and aircraft used on different routes.

Before users can find out the footprint of their journey, the calculator asks them to instead consider attending the conference virtually as this generates only one-thousandths of the footprint as flying to Sharm El-Sheikh, according to the researchers.

"It's not a zero-emission option," said Parikh, who is the acting director of The Bartlett School of Sustainable Construction. "With software and internet use, there is an implication of emissions – but it's very low."

If travel cannot be avoided, the toolkit suggests compensating for the associated emissions by using Gold Standard-certified offsetting schemes that don't just remove CO2 from the atmosphere but simultaneously promote climate justice and resilience in the Global South.

This is one of the key topics at COP27, which is the first of the annual Conference of the Parties to be hosted outside of Europe since 2016's COP22 in Marrakech.

"This year, with COP returning to North Africa, climate justice will feature prominently in the discourse," Parikh wrote. "How we choose to offset the footprint of this COP should therefore reflect a commitment to combatting this issue."

Taking the train via Milan has the lowest footprint

Parikh and her team also used the calculator to run through various scenarios and determine the most sustainable way of travelling from the UK to Sharm el-Sheikh.

One of their key findings, published in an accompanying report, is that the emissions savings that can be made by taking the train or coach are relatively small in the case of this journey.

That's because to reach Egypt, some form of plane travel is currently inevitable due to geopolitical issues in nearby Libya and Syria, and a lack of transport links from Europe.

The greatest carbon savings could be made by travelling to Milan via train before catching a plane across the Mediterranean, Parikh said, which would reduce the journey's carbon footprint by 40 per cent compared to taking a direct flight.

"In these cases, the moderate benefits of travelling part-way by rail or coach are offset by the significant time and financial investment of such journeys," she wrote.

"The UNFCCC should therefore consider the availability of non-flight transport links when choosing the location of future COPs."

"Whilst hosting COP outside of Europe is important for promoting equity between member states, the particular location of Sharm el-Sheikh between conflict-torn countries makes reducing its significant carbon footprint near-impossible outside of choosing digital delegation." 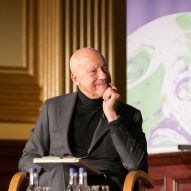 Parikh and two other UCL researchers will still be attending COP this year. But they will be taking different measures to cut down their carbon footprint by reducing the number of days in attendance and watching the rest virtually, travelling as a group and ultimately offsetting the associated emissions.

Her hope is that a growing number of built environment professionals will join the conversation, whether virtually or in person.

"If we could facilitate that dialogue between architects across boundaries, I think there are a lot of valuable lessons that could be learned around looking at buildings differently, looking at materials and local craftsmanship."

The top photo by Kristina Loburets shows a plane taking off from an Egypt airport.

COP27 will run in Sharm El-Sheikh, Egypt from 6 to 18 November. See Dezeen Events Guide for an up-to-date list of architecture and design events taking place around the world.