Dutch designer Nynke Tynagel has teamed up with textile brand Byborre to create a deck chair featuring an elaborate 3D-knitted tapestry of the human anatomy.

According to InCC, the manufacturer of the limited-edition Anatomic chair, it is the most complex 3D textile ever produced.

"Due to the complexity of the knit, it took over 28 development rounds to get the fabric right," said the brand.

Tynagel – best known as the former co-owner of Studio Job – drew inspiration from anatomical diagrams she remembered from her childhood.

Different textures are used to create the different elements of the human body's inner workings, including nerves, muscles, intestines, stomach, lungs and heart.

The designer came up with the idea after InCC – a new Amsterdam-based brand – invited her to create its inaugural product.

"Thinking about the blank canvas, the first thing that came to my mind was the imprint of a human body sitting in the chair," Tynagel told Dezeen.

"Not the outside of the body, but the inside in all its guts and glory, because it's more fun and intriguing to draw and translate into Byborre's beautiful and innovative 3D knittings," she said. 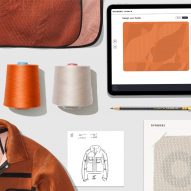 Led by self-confessed textile-obsessive Borre Akkersdijk, Byborre has developed a uniquely innovative approach to textiles that exploits the possibilities of circular knitting machines.

Anatomic showcases the full scope of the company's technical abilities.

The process was only possible because Tynagel created her design in a multi-layered, vector-based digital format.

"The big advantage of my digital vector drawings is that they can be easily translated into different crafts like marquetry and stained glass, alongside laser and other printing techniques," she said.

"ByBorre did a great job translating my design into a knitted artwork."

Anatomic was first unveiled at the Rosanna Orlandi gallery during Milan design week earlier this year and was also presented at the recent Dutch Design Week.

The design is being produced in a limited edition of 600. Each piece is manufactured from recycled polyester and Dutch oak. Instead of being used as a chair, it could also be hung on the wall as an artwork.