A series of openings that let in natural light penetrate a residential building in Delhi named House of Voids, created by Indian architecture studio Malik Architecture.

The Indian house is on a dense urban site, which led Malik Architecture to design skylights and openings between floor levels to maximise natural light entering the home.

The structure was made from reinforced cement concrete with exterior walls clad in Gwalior mint sandstone.

Malik Architecture separated the house's circulation from the main living and office areas with the stairwell situated on the east side of the home, where there is little opportunity to gain natural light as the site shares a wall with the adjoining plot.

The western facade of the house is set back six metres from the neighbouring building.

Malik Architecture created openings, screens and characteristic voids that penetrate multiple floor levels to flood the living spaces on this side of the home with sunlight.

Office spaces were located in the basement and mezzanine level above the ground floor while the main living spaces begin from the first floor, which is cantilevered six metres above a ground-level courtyard.

The living room on the first floor opens onto a terrace that is surrounded by the foliage of the ground-floor trees.

"The excisions are very deliberate; for example, the angular slice at the northwest corner, where the living room opens into the veranda deck, is made to maximise the experience of large trees within the plot and beyond," Malik Architecture told Dezeen. "This same slice turns into a north light for the living room."

"The slices, voids and excisions are the protagonists for the spatial and structural frameworks of the house – connecting people to light and the trees," the architecture studio continued. 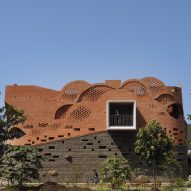 According to Malik Architecture, Delhi's neighbourhoods have traditionally been characterised by two-storey houses with front gardens that separate the buildings from tree-lined roads.

Malik Architecture designed House of Voids with green spaces and openings that let in light and restore thermal balance in ways that are indicative of the traditional Delhi building typology.

"This proposal re-evaluates the typology of the building form as prescribed by the current guidelines and adapts it to re-establish the sensation of the pre-existing urban condition by introducing a network of labyrinthine voids running through the house, catching light and restoring thermal balance, expressed as a combination of green spaces, deep fissures and skylights," said Malik Architecture.

"A gigantic structural pylon is the load-bearing pivot for the cantilevered superstructure, creating shaded ground and resonating the language of Delhi's monumental institutions."

Malik Architecture created fixed and operable sandstone screens for the exterior of the house to provide shading and privacy, which were cut by hand and water jet techniques.

"We resisted the urge to use intricate or ornamental patterns for the screens, choosing instead to focus on the sense of the heavy stone mass dissolving into abstract compositions of light and shadow," said Malik Architecture.

"A few panels with traditional patterns were randomly inserted into the overall composition."

House of Voids has been shortlisted in the urban house category of Dezeen Awards 2022, alongside a compact family home in Tokyo where the staircase is designed as a relaxing social space and a house in Melbourne that makes the most of its narrow plot with eight courtyards and gardens.

The photography is by Bharath Ramamrutham.