Local studio Artefact drew on "20th-century courtyard houses" when creating Pirouette House, a cloister-like extension to a 1980s building in Islington, London, made from red timber.

The extension was added to a home in a row of "nondescript" single-aspect houses, which had been modernised a few years previously.

Its shape helps create a hidden courtyard that functions as a secret oasis, according to London studio Artefact.

The interior spaces "pirouette" around a triangular blue column, giving the project its name.

Outside, the addition features a cloister-like facade, made from red timber fins and large windows sat atop a pigmented blockwork bench.

"Formally, the analogy to cloisters and colonnades was important – we were interested in the way they create rhythm and order, and define the character of courtyards within."

Making the pillars a prominent feature was both an aesthetic choice and a way to lower the amount of embodied carbon created by the Pirouette House extension.

"The posts are both structural and expressive, supporting the timber frame and bringing rhythm to the elevations surrounding the courtyard," Artefact director Benedetta Rogers explained. "From the outset, we wanted to use structural timber to minimise the embodied carbon of the extension, avoiding steel where possible – one flitch beam was required."

"The structural solution and the character of the facade were developed together, with slender posts at regular intervals unifying the courtyard and creating the feeling of living around a timber cloister," she added.

The exterior also features silver-grey larch boards, while Douglas fir beams and boards decorate the interior, which is lit by diamond-shaped skylights.

As well as adding more space, the extension helped solved an existing issue. The single-aspect house had a lot of glazing on its western side but only one bi-folding door that could be opened to ventilate the space, which meant it overheated in the summer. 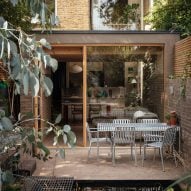 "By adding an L-shaped extension we created cross ventilation through the house with openings on the roof and opposite sides of the living spaces," Marmot said.

"The majority of the extension faces north so there was also the opportunity to introduce reasonably large areas of glazing to maximise daylight without overheating."

Colourful pastel hues were used for both the interior, where a pale-blue pillar and a sunny yellow built-in bookcase contrast a dusky pink staircase, and for Pirouette House's facade.

Here, the red pillars pick up the hue of the pinkish concrete used for the blockwork, while also referencing the existing building.

"Externally the red fins pick up on tones in the existing brickwork, while feeling bold and distinctive," Rogers said. "Contrasting the grey of the infill boarding with these primary structural elements was important to accentuate their rhythm and to create an elegantly proportioned facade."

The fact that the existing building as well as its surrounding buildings were "unremarkable" created an opportunity to showcase how changes can be made to help extend the life of old homes.

"Transforming the perception of buildings from this era is as important as the technical solutions and an integral part of the sustainability discourse in the project; our hope is that showing how an unremarkable 1980s house can be completely transformed through creative intervention will encourage more people to invest in rather than demolish these houses, extending their lives," Rogers added.

Other recent housing extensions in London include a bright yellow-painted CLT extension and an extension designed as a "sanctuary".

The photography is by Nick Dearden.