The 32-storey high-rise, now the tallest in the Ecuadorian capital, comprises 220 apartments alongside a mix of commercial and office spaces designed for developer Uribe Schwarzkopf.

The 133-metre-high skyscraper is defined by its distinctive exterior, which towers over Quito's skyline with a facade of concrete boxes topped by balconies dotted with native plants and trees.

These are arranged by BIG to frame views over the city and the Pichincha volcano and are intended to act as a continuation of the adjacent park as the greenery flourishes over time.

"We've tried to take all the iconic qualities of Quito – such as the enjoyment of living in one of the most biodiverse places on the planet, in a city on the equator where the seasons are perfect for both human and plant life – and bring that experience into the vertical dimension," said BIG's founder Bjarke Ingels.

"Iqon is an entire vertical community of individual homes; an extension of La Carolina Park that now climbs all the way up to the rooftop."

Iqon was created for Uribe Schwarzkopf as one of two landmark residential buildings for Quito. The other is the Qorner building, which is Safdie Architects' first residential project in South America.

According to the developer, the completion of Iqon and Safdie Architects' neighbouring building reflect the boom of contemporary architecture in Quito. 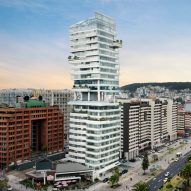 "Iqon and Qorner represent the ongoing transformation of Quito into a cornerstone of architecture, design and innovation," said Uribe Schwarzkopf's co-founder Tommy Schwarzkopf.

"As the first residents move in and businesses begin to take space in the building, we are looking forward to seeing each building come to life and become part of the fabric of the city.”

The residences range in size from one to three-bed apartments. This includes nine penthouses, positioned to ensure panoramic views of Quito.

Alongside the residences, offices and commercial spaces, the building features a grand ground-floor plaza complete with public spaces, shops and a vegetable garden.

Other amenities include a rooftop pool and terrace, as well as sports and spa facilities, a bowling alley and a music room.

Founded by Ingels in 2005, BIG is an architecture studio with studios in Copenhagen, New York, London and Barcelona.

Other tall buildings recently completed by the studio include the Telus Sky Tower in Canada, which is designed to stand "like a lady in a cluster of cowboys", and the CapitaSpring skyscraper in Singapore that it designed with Carlo Ratti Associati.

The photography is by Pablo Casals Aguirre, courtesy of Uribe Schwarzkopf.