Sicilian designer Matteo Guarnaccia continued his Cross Cultural Chairs project by inviting 13 designers from around the world to Kazakhstan to create horse saddles with local artisans that take cues from traditional nomadic culture.

The previous chapter of Guarnaccia's Cross Cultural Chairs project was completed last year and involved designing chairs informed by the specific seating habits of the world's most populous countries.

For the project's most recent edition, Guarnaccia collaborated with local designer Zhanna Ee and local curator Vlad Sludskiy. The trio hosted 13 designers in Kazakhstan where they designed five horse saddles in groups during a workshop held in August.

Local artisans then worked with the designers to create the saddles, introducing them to techniques such as wood carving and leather embossing.

According to Guarnaccia, the project uses saddles to celebrate the traditional nomadic way of life that historically characterised Kazakhstan, before changes during Soviet times created a more sedentary and settled culture.

"The Soviet Union meant 'progress' and the nomad way of living was no longer a profitable option, so the entire area of central Asia was forced to shift to a sedentary structure, with brand new cities, monuments, indoor markets and highways," said the designer.

"This 'innovation' didn't leave space for horses and hunting and the nomad way of living started to disappear," he told Dezeen.

"I was interested to explore and understand how this forced transition happened and what was left of the previous culture, in terms of aesthetics and habits."

Guarnaccia and Ee formed one group, which designed a birch wood saddle with a prominent steel handle that explores both traditional craftsmanship and "alternative" materials.

Designers Anna Ziegler, Belen Cabello and Timur Aktayev collaborated to design a saddle centred on the importance of comfort for horses, creating a stretched leather saddle with a pillowy foam seat that is designed to cushion the horse's skin.

Another saddle was created from a green-hued vintage raincoat sourced from a local market, which features rounded shapes that reference ancient saddles and hanging bags for storing items during long journeys.

Designers Helena Postigo, Elena Ianeselli, Nomundari Munkhbaatar took cues from the colours of the Kazakh steppe when designing the saddle, while the durability of the outdoor gear used to create it intends to echo nomads' "appreciation of and connection to nature".

Recycled plastic, steel screws, iron tubes and colourful artificial felt were used by designers Daria Kokonja, Ryanne Flock and Elena Chantzis to design a saddle that can be disassembled and personalised with different materials.

"The option of 'personalising' the saddle is not only practical but also refers to the fluidity of identity adapting to [Kazakhstan's] social, cultural and political environment," they explained. 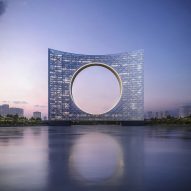 Kazakhstan's flag reinterpreted as new building for the capital

Designers Kayla Welsh and Lucas Momparler opted to create their saddle in a deep shade of blue, which features curved lines and is made from a combination of materials including birch wood, foam and elastic bands.

This design intends to nod to both the "intensity" of modern city life and the "peaceful rhythms of the rural countryside," according to the designers.

"The saddles came from a desire to expand the intention of [a] 'chair'," Guarnaccia reflected on the project as a whole.

"During the eight months of the first part of this project around the world, I realised that chairs are a very western concept of resting and I wanted to explore other objects that answer to the necessity of seating."

"Saddles are a very old object, and during centuries they haven't evolved much, neither in shape nor materiality," he concluded.

At the end of the workshop, the saddles were presented at Kazakhstan's Kasteyev State Museum of Arts and were also exhibited at Paris' Union de la Jeunesse Internationale in October.

Director and cinematographer David Leon Fiene is currently producing a documentary about the project.

Other projects that explore the potential of seating include a collection of furniture by Trent Jansen that takes cues from creatures referenced in Australian folklore and 3D-printed stools for beaches that double as shelters for marine animals.

The images are courtesy of Matteo Guarnaccia.