British startup Water-Filled Glass has developed panes of glass filled with water that use sunlight to power a "crazy" energy-saving heating and cooling system.

Its windows contain a thin layer of water between glass panes, which absorbs heat from sunlight or other radiation, such as heat leaving a room.

The warmed water is then pumped through sealed pipes at low pressure to colder areas of the building, through an underfloor system or into thermal storage.

By absorbing thermal energy in this way the water-filled glass also limits how much solar heat gain enters the building through windows, reducing the need for air-conditioning in hot climates.

"We know that putting water in the window sounds like an outright mad idea," Gutai told Dezeen.

"But we believe this is important because when you think about the energy of buildings and cutting carbon emissions, there's still great potential and opportunity to think about glazing. Glass is responsible for a great part of heating and cooling energy consumption, and it's a ubiquitous material, it's on almost every building."

"And if you think about that potential, I think even crazy ideas are somewhat warranted," he continued. "Even if the idea sounds a bit mad off the bat, I think it's important to think of alternatives to what we have. So we have crazy ideas, but we're not crazy."

WFG estimates that, depending on climate and a building's window-to-wall ratio, its technology can reduce energy bills by around 25 per cent compared with standard windows.

The startup's first commercial projects, an industrial building in Hungary and a residential development in the US, are now under construction.

It has completed two prototype buildings using the technology, named Water House 1.0 and Water House 2.0 (pictured) – the former a small cabin in Hungary and the latter a pavilion at Feng Chia University in Taiwan.

"The whole idea comes from the recognition that moving energy is much, much cheaper than heating or cooling the space," said Gutai, who previously worked for prominent Japanese architect Shigeru Ban and in Kengo Kuma's research lab at the University of Tokyo.

"That really excited us about water-filled glass," he added. "We wanted to actually give architects the opportunity to build even completely fully glazed buildings if they want to without any compromise on sustainability." 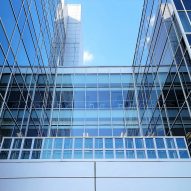 Because the system uses off-the-shelf glass and parts, WFG claims it does not greatly increase the embodied-carbon impact of construction as well as being easy to manufacture.

The company also insists its system has no impact on the aesthetics of the building inside or out, since water absorbs most energy from the part of the light spectrum that is invisible to humans.

A monitoring device is fitted to clean the water automatically, with maintenance checks required once a year.

In colder climates, the water-filled glass system uses triple-pane windows, the outer cavity filled with argon insulation to prevent the water from freezing during winter.

Capable of heating water up to temperatures of around 40 degrees Celsius, the technology can be connected to a conventional heat pump or boiler.

WFG has also developed a retrofit version of its product, where the system can be fitted behind existing glazing without having to destroy the windows already in place.

The images are courtesy of Water-Filled Glass.