London studio Zaha Hadid Architects has created a series of tent-like classrooms for displaced communities, which were designed by the late Zaha Hadid and Patrik Schumacher.

One of the last structures designed by Hadid, the tents were created by Zaha Hadid Architects (ZHA) in collaboration with non-profit Education Above All Foundation (EAA) as schools and health clinics for displaced populations throughout the Middle East.

Several of the tents have been supplied to the International Organisation of Migration (IOM) in an initiative supported by Qatar's Supreme Committee for Delivery & Legacy in the wake of the 2022 FIFA World Cup in Doha.

The modular structures each have a steel frame secured with concrete foundations that supports stretched fabric walls and roofs.

A central enclosed space in the 12 metre-long by eight metre-wide module, which will primarily serve as a classroom for up to 45 students, is topped with roof light, while areas of translucent material let in further light.

Surrounding the central space are a series of curved sail-like forms that provide shade and give the shelters a distinctive appearance.

"Together, we developed a robust, cost-effective, and lightweight modular architectural system with fabric envelope to build structures that can be adapted in many variations to meet the conditions and lives of displaced children and children on the move," said ZHA project architect Gerry Cruz.

"We hope that these newly donated tents will bring safety, learning and play to thousands in Yemen, Syria and Turkey"

In total, 27 of the modular structures will be built. They were each designed to be easily assembled and disassembled as well as to be expandable.

In addition to the IOM, donations will also be made to the charitable organisation Qatar Red Crescent. This initiative was announced at the ZHA-EAA fan tent at the FIFA World Cup last month.

According to the collaborators, the initiative is meant to make sure that the World Cup in Qatar "has a lasting impact, beyond the tournament".

So far, three tents have been delivered and put to use for displaced Pakistani and Syrian children who are currently residing in Pakistan and Turkey, respectively.

The remaining tents will be given to displaced populations in Turkey, Yemen and Syria. 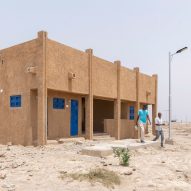 Many of the remaining tents will be committed to educational facilities, while five have been allocated for use as health clinics.

The initiative was developed in response to more than 70 million people who are currently displaced from their homes, more than half of which are under the age of 18, according to EAA.

Over the past several years, many architecture studios have come forward with suggested implementations to create emergency housing for displaced populations, including Cutwork's plan to create concrete textiles for rapid construction as well as a number of housing solutions that have risen in response to the war in Ukraine.

More permanent solutions have been implemented by architects like Tosin Oshinowo, who created a village to replace one destroyed by the terrorist group Boko Haram in Nigeria.

The photography is by Luke Hayes, unless otherwise noted.