Industrial designer Marc Newson has created a public toilet topped with a traditionally shaped copper roof in Shibuya as part of the Tokyo Toilet project.

Located under a raised highway to the north of Yoyogi Park in Tokyo, Newson's structure is the latest to be completed as part of the project that has seen toilets designed by architects including Tadao Ando, Fumihiko Maki and Shigeru Ban.

Made from concrete, Newson's simple structure was designed to be highly functional, with men's and women's toilets placed on either side of a central disabled toilet.

"It is important to me that the toilet feels trustworthy and honest inside and out: the bright interior is seamlessly and hygienically finished in a monochromatic green, one of my favourite colours," said Newsom.

"My design for the Toilet focuses on functionality, simplicity, and creating an inviting and enduring space."

Topped with a pitched copper roof, Newson's design was designed to feel familiar and was informed by traditional Japanese temples and tea rooms.

"Central to my design is the reference to vernacular Japanese architecture, including the copper Minoko roof," he said. 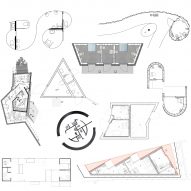 "Often found in shrines, temples and tearooms and in rural areas, I wanted the roof form to trigger a subconscious feeling of comfort and peacefulness amid its busy, hypermodern location," he continued.

"The patina on the copper pyramidic roof will integrate the structure into the city over time, so it becomes part of the fabric of Tokyo."

The toilet is the 14th to be completed as part of the Tokyo Toilet project, which is run by the non-profit Nippon Foundation.

Previous toilets include structures by three Pritzker Architecture Prize winners. Shigeru Ban created a pair of transparent blocks that are illuminated at night , Tadao Ando designed a circular toilet, while Fumihiko Maki topped his block with a "cheerful roof".

The photography is by  Satoshi Nagare, courtesy of the Nippon Foundation.