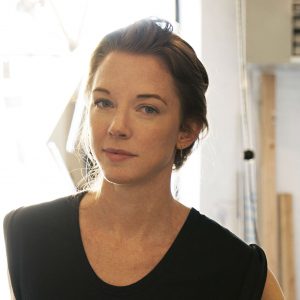 Bec Brittain is a New York-based lighting and product designer.

After studying product design, philosophy and architecture, Brittain began her career designing and producing bespoke door hardware, and discovered a love of metalworking. Brittain continued to hone her hardware handcrafting skills whilst Design Director at Lindsey Adelman Studio from 2008 to 2011.

In 2011, Brittain founded her eponymously named studio in Brooklyn and developed her signature product, the SHY Light. Bec Brittain products are all designed and engineered by Brittain, and produced in New York by local fabricators and artisans. Every piece is hand assembled by the studio team and personally inspected by Brittain.

Brittain’s designs are driven by intuitive forms, luxurious materials and forward-thinking technology. With the help of a small and dedicated team, Brittain continues to explore and experiment with new materials and techniques, pushing the boundaries of American-made lighting design.

Brittain’s work has been featured in numerous publications such as The New York Times, Wallpaper* magazine and Elle DÉCOR, and can be found in residential and commercial projects all over the world.