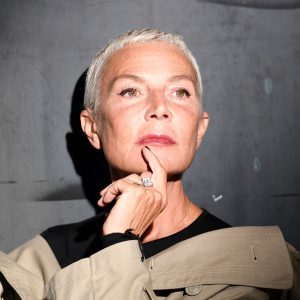 Fuksas received a degree in architecture from École Spéciale d'Architecture (ESA) in Paris and graduated from the University of Rome in History of Modern and Contemporary Architecture in 1979. She has taught at the Institute of History of Art, the Faculty of Letters and Arts and the Sapienza University in Rome. She has curated four special projects at the Venice Architecture Biennale.

The architect became director of Fuksas Design in 1997 and now leads Studio Fuksas with partner Massimiliano Fuksas, who she has worked with since 1985. Together they have designed over 600 projects worldwide, including a terminal at Shenzhen Bao'an International Airport, the new EUR convention centre and hotel in Rome, the National Archives of France in Paris, the Ferrari headquarters and research centre in Maranello and a concert and exhibition venue in Tbilisi. The studio installed a 4-storey sculptural steel staircase at the Armani 5th Avenue store in New York in 2009. Studio Fuksas now has over 170 employees and offices in Rome, Paris and Shenzhen.

Fuksas has designed collections with various brands including seating for Poltrona Frau, the Sit-Sat chair for Sawaya & Moroni, a ceramic vase for Alessi and lamps for Venini, iGuzzini and Slamp. She was also the author of the Design column in the Italian newspaper La Repubblica between 2014 and 2015.