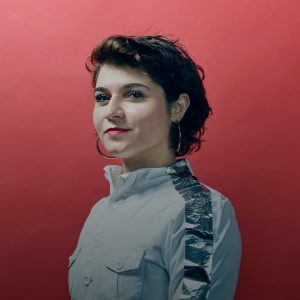 Nelly Ben Hayoun designs experiences that explore topics including politics, science and theatre. Her projects include The Other Volcano, Super K Sonic BOOOOum, and the creation of the first International Space Orchestra formed of NASA astronauts and scientists.

A former tutor at Central Saint Martins, Hayoun joined students to protest threats to Erasmus programme triggered by Brexit in 2016. A year later, Hayoun founded the University of the Underground, a cultural programme that aims to disrupt academia.

Hayoun is also an advisor to the United Nations Virtual Reality Labs, a member of the American Institute for Graphic Arts advisory board, research director at Brooklyn-based creative space A/D/O, chief of experiences at WeTransfer and designer of experiences at the Search for Extraterrestrial Intelligence Institute.

She was recipient of the inaugural Wired Innovation Fellowship in 2014 and was named one of the top 50 designers by Icon magazine.