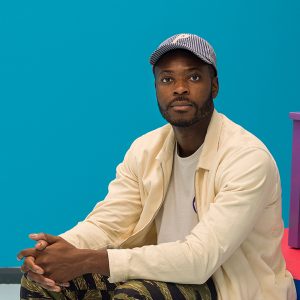 London Metropolitan University graduate Yinka Ilori uses humour and colour to inject fun into his furniture. Inspired by parables and African fabrics from his Nigerian upbringing, the designer tells stories through each piece he creates.

Ilori's projects often involve local communities; in 2017 he worked with volunteers from social enterprise Restoration Station to create a series of upcycled chairs with recovering addicts, which were displayed at London Design Festival. The designer also won a competition to transform a rundown London bridge in south London, which he is developing with the surrounding community and will be revealed at London Festival of Architecture 2019.

Ilori’s contemporary furniture has been exhibited in galleries across the globe including the Vitra Design Museum, the British Library, Southbank Centre, Atlanta's High Museum of Art and The Africa Centre.