The "anti-culture uniform" of teenagers from cities around the world has been reinterpreted into a range of menswear for London fashion brand Sibling's latest collection.

A hand crocheted tracksuit and motocross jacket and mohawk headpieces made from viscose "hair" form the backbone of Sibling's Spring Summer 2015 collection.

The London-based fashion studio, founded by Sid Bryan, Joe Bates and Cozette McCreery, said that the collection was themed around teenagers, with spots and hair – "the two biggest preoccupations of your average self-obsessed youth" – appearing as motifs throughout the collection. 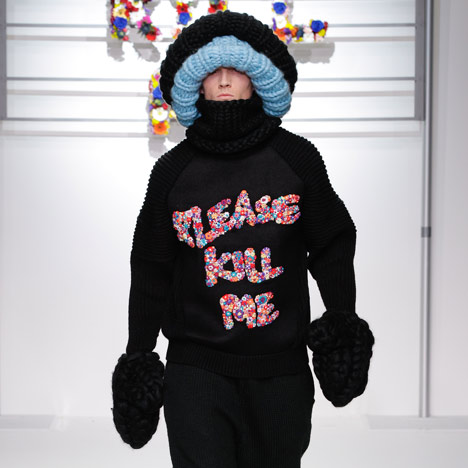 Please Kill Me by Sibling

A series of looks were created by trapping individual strands of artificial viscose hair into a knitted yarn to create webbed garments covered in fine fringing.

Denim pieces were patterned with large paler spots made out of a series of smaller dots, as if they had once been covered with metal studs. On black, red and yellow sequinned knitwear, more spots mutated into the leopard print pattern that Sibling has used in previous collections.

Huge red pompoms made of raffia were used to create two spiky outfits to close the show.

"Rarely are clothes worn more as armour than when you're young," said the designers. "The pack anonymity of a group of 'hoodies', the up-yours gesture of a boy in a skirt or the societal baiting of a shocking hairstyle... challenging conformity and in-your-face declarations are everything."

"While racked with insecurities, there is also the joy and power of dressing and grooming to extremes. Boundaries of taste or decency are pushed to breaking point, but there is a secret strength drawn from every stare, gasp or giggle."

The studio collaborated with artist Mike Egan, who created cartoonish skull prints for hoodies and T-shirts, and footwear designer Robert Clergerie for the shoes.

Although the collection debuted at this week's London Collections: Men fashion showcase, it also included pieces from Sibling's newly-launched women's resort range, which featured looks "stolen straight from the boys but made feminine".

Aprons and tunics for both men and women featured heavily, with the intention of creating a warrior-like visual effect and challenging gender stereotypes.

"With an unwritten code, [teenagers] form tribes and gangs, or in the Sibling world: families. It is a world of extremes and exhibitionism where a warrior attitude is essential," said the designers.