Maison&Objet 2014: Italian designer Alessandro Zambelli has designed a lamp with a hexagonal wooden shade that extends over its light bulb like a hood to meet the surface of a table.

Alessandro Zambelli designed the Woodspot table lamp as a hexagonal pyramid that has had both its top and bottom diagonally sliced off.

"It could be the iconic meeting point between the rectangle of a frame and the cylinder of a stage spotlight, a shape in between," Zambelli told Dezeen. 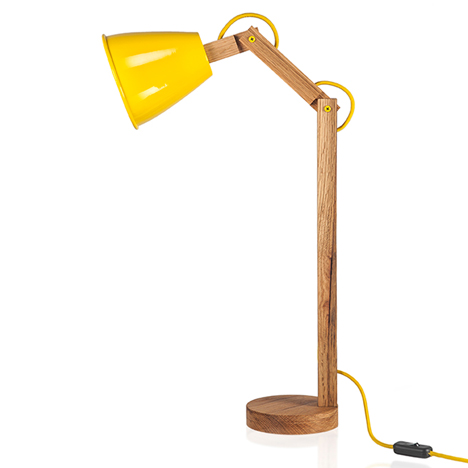 Both made from pine, the shade and the base support one another, like the a photo frame with a prop behind.

Light from the bulb is cast onto both the natural wood interior of the shade and the surface it sits on.

The designer says his starting point for the design was a series of paintings called The Empire of Lights by surrealist artist René Magritte, which all feature a single street lamp glowing in a dark landscape.

"The emerging beam lightens the solid materiality of the wood and casts a warm and compact pool of light in the surrounding darkness," said Zambelli.

Each lamp is made by hand, and the shade is available in pastel green, pink or white.

Zambelli will present Woodspot at Maison&Objet in Paris later this year for Italian brand Seletti. The designer also launched a lighting project at the most recent edition of the biannual design fair – a series of lamps with 3D-printed nylon shades that diffuse glow.