A small wooden cabin with louvred brass windows occupies the centre of this Isabel Marant fashion boutique in Shanghai, designed by Ciguë to reference the traditional houses that once populated the site (+ slideshow).

Parisian studio Ciguë designed the interior of the Isabel Marant store, which occupies a space inside a new shopping mall in the centre of Shanghai near to one of the Chinese city's oldest temples. 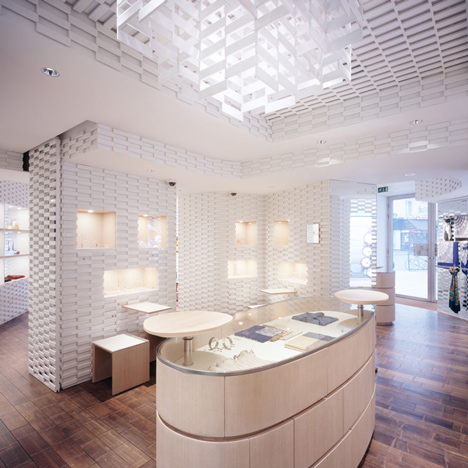 The studio built a cabin in the centre of the store as both a reference to the site's former residential function and to nail houses – a Chinese phenomenon that occurs when residents refuse to accept compensation to leave their homes in areas that are being redeveloped, resulting in stranded structures that have become a symbol of resistance.

"The layout of the shop was inspired by 'nail houses', a common phenomenon in Shanghai and many modern growing cities, where commercial urban projects replace former residential areas, confronting the resistance of their inhabitants," said the studio.

Oak-framed panels with brass louvres are suspended at different heights from floor to ceiling in one corner of the store to simulate sections of fencing, while oak panels are used to create doors and partitions as well as the central cabin-like structure, which contains drawers and cupboards for stock storage.

"Designed as a cosy shelter for the store staff it becomes the core of the shop, around which the collections are displayed," said the designers.

Vertical glass cases are fixed to the exterior walls of the wooden cabin to display a range of jewellery. Tables with surfaces made from the same blue stone tiles that cover the floor have hollowed-out sections to display belts and other small accessories.

A larger arrangement of tables is positioned in a pyramid shape beside the entrance to the fitting rooms, displaying shoes and belts.

Clothes hang from steel rails attached to sections of the display walls at either side of the shop, which are clad in hand-made ceramic tiles.

Fitting rooms are placed at the rear so shoppers can use the mirror that covers the rear wall, creating the illusion of additional space.

Here's some information from Ciguë:

Over the last 3 years, Ciguë, a Paris based architecture office, has been collaborating with Isabel Marant to design 6 of the brand’s flagship stores around the world.

After the recent opening of a new store in Bangkok, the architects worked again with Isabel Marant for her new address in Shanghai.

The shop takes place in a recently built shopping mall, the Réel Department Store, that is part of a larger urban project, located in the centre of Shanghai, where one of the city’s oldest temple lays, the Jing'an Temple, originally built in 247 AD.

Except for the temple and Chairman Mao former Shanghai residence, any traces of the preexisting neighbourhood remains.

The layout of the shop was inspired by 'nail houses', a common phenomenon in Shanghai and many modern growing cities, where commercial urban projects replace former residential areas, confronting the resistance of their inhabitants.

Surrounded by walls and fences made of handmade plaster tiles and brass louvers, the centre of the space is occupied by a small wooden cabin, recalling the former houses erased by the mall’s construction. Designed as a cosy shelter for the store staff it becomes the core of the shop, around which the collections are displayed.