Stadiums currently hosting football matches for the FIFA World Cup 2014 in Brazil are captured in these graphic posters by Portuguese illustrator André Chiote.

André Chiote has illustrated five of the 12 World Cup stadiums in Brazil, using his signature style that highlights key elements of a building's design with blocks of colour. 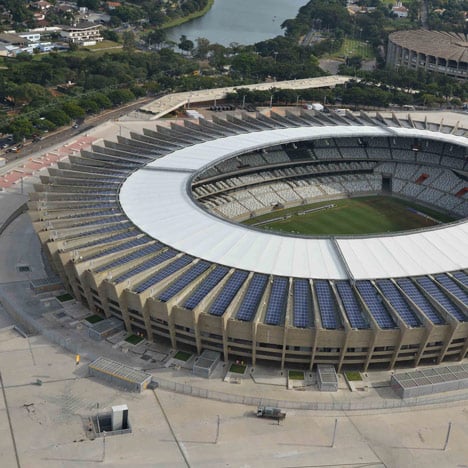 To illustrate the Amazonia Arena in Manaus by GMP Arkitekten, he picked out the diamond grid pattern that criss-crosses the rounded structure.

Fernandes Arquitetos' renovation of the 1950 Maracanã Stadium in Rio de Janeiro has been characterised by the pleats on the roof, while the structural fins are highlighted on the 1965 Mineirão Stadium in Belo Horizonte revamped by BCMF Arquitetos.

The graphics are coloured with shades of blue, yellow and green, colours found on the host country's flag.

"The construction of new football stadiums means, for a country who hosts an event like a World Cup, the statement to the world of its technical, financial and cultural capacity," Chiote said.

"So, as a national statement, I thought it was an interesting approach to use the colours of Brazil's flag to produce iconic images of some new symbols of that country."

He explained that what interests him about stadiums is "the capacity to become landmarks and city icons".

"Also, usually, as they are exceptional buildings, architects and engineers develop innovative designs and technical solutions," he added.

Some of the stadiums' architectural elements reflect a national style found in these other buildings, according to Chiote.

"By their function, stadiums usually have some specific design characteristics," he said. "However, the curve elements and expressive structures, used in the some stadiums, I think are common in a certain Brazilian architecture."

Chiote plans to illustrate the other seven stadiums as the tournament continues.

This year's FIFA World Cup kicked off in São Paulo on 12 June and will conclude with the final match in Rio de Janeiro on 13 July.

Other stadiums being used as venues for the event include the Beira-Rio Stadium in Porto Alegre and Arena das Dunas in Rio Grande do Norte. See more design for the FIFA World Cup 2014 »