Vo Trong Nghia Architects, who also recently completed a concrete house with trees on the rooftops, was asked to create an identity for Viet Vuong that would set them apart from the 4,000 other manufacturers of export clothing in Vietnam.

"The aim of the project is to redefine the company's identity through renovation in order to stand out among their competitors," said the design team. 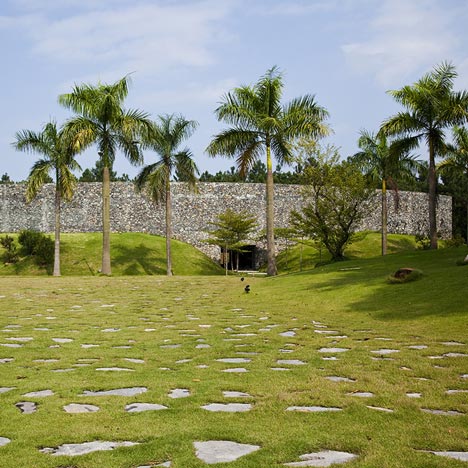 The studio concentrated the intervention on the two sections of the factory most visible to visitors – the entrance reception and the administrative department that accommodates the company's meeting rooms.

A suspended bamboo ceiling appears to drape down from overhead like a huge woven blanket, concealing ventilation ducts, electrical equipment and lighting fixtures. This frames the first-floor meeting room, and also extends down over the reception.

A large internal window was another addition, intended to create a stronger visual connection between the offices and the factory floor below.

"A theatrical juxtaposition of the existing factory and new office was proposed to emphasise the well-managed factory environment and its dynamism, say, a spectacle of 1,200 skilful workers sewing numerous ski-wear in a tropical climate," said the firm.

"The large glazing between the factory and the office enhances the communication between administrative staffs and factory workers," they added.

Glazed partitions separate the main office floor from a series of meeting rooms and private offices that run along the edges.

Each of these spaces feature bare brick walls that, like the bamboo ceiling, were intended to provide an expression of traditional local architecture, creating what the team describes as a "textile surface".

The final addition was a grid of wire installed over the exterior walls to encourage bougainvillea vines to grow across the facades.

Photography is by Hiroyuki Oki, apart from where otherwise indicated.

This is a factory renovation project of Viet Vuong Co. Ltd. a garment firm located in Ho Chi Minh City, Vietnam. Textile and garment is one of the biggest industries of the country, where more than 4,000 apparel manufacturers operate mainly for export markets. The aim of the project is to redefine the company's identity through renovation in order to stand out among their competitors.

The existing factory is a two-storey steel building (25m x 90m). The refurbishment is concentrated on two sections, one on the upper floor for administrative office and another small one on the ground floor for the reception. The remaining space is left for manufacturing work that was kept operated even during the construction period.

A theatrical juxtaposition of the existing factory and new office was proposed to emphasise the well-managed factory environment and its dynamism, say,  a spectacle of 1,200 skillful workers sewing numerous ski-wear in a tropical climate.

The central administrative office space is designed as a passageway. By opening up a large window on its existing envelope, this passage conveys insight view to the factory space which was formerly mostly enclosed. The large glazing between the factory and the office enhances the communication between administrative staffs and factory workers.

Closed rooms, such as the directors' rooms and meeting rooms, are positioned along the aisles of the central office space. These rooms and the office are separated by transparent glass partitions, which showcase the company's products and samples like shop windows.

Local materials are used throughout the project such as exposed bricks and bamboos to express the local identity and environmental consciousness. A pliable bamboo ceiling, concealing mechanical equipment and lighting fixtures, is designed for the central office space to simulate a textile surface. A part of this bamboo ceiling flows into the ground floor and becomes the ceiling of the reception area to welcome the visitors.

Stainless wires are attached to existing facade and expected to be covered with bougainvillea in the near future. The warm natural materials and greenery provoke a stark contrast to the existing steel structure of the factory.