British photographer Jim Stephenson has shared his images of the Serpentine Gallery Pavilion 2014 by Chilean architect Smiljan Radić, which was unveiled earlier today in London (+ slideshow).

Radić – who has built little outside his native Chile – designed the pavilion as a doughnut-shaped shell that appears to balance precariously over a pile of huge rocks. Openings in the walls form balconies, while a bridge and pathway offer routes inside.

Following a press preview this morning, critics have come out in favour of the design, with comparisons ranging from dinosaur eggs to turtles and spaceships.

"What is most captivating about Radić's heroically peculiar pavilion is the way that it seems to stand out of time," wrote critic Ellis Woodman in the Independent. 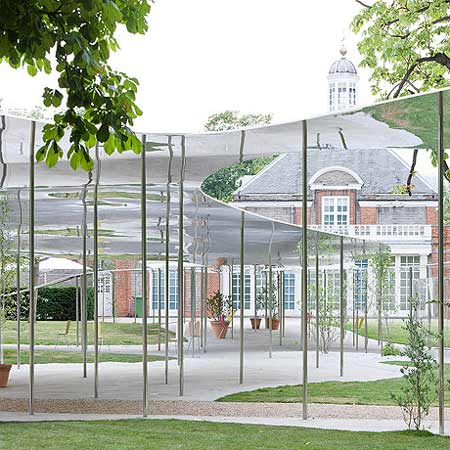 After describing the protruding front balcony as like "the head of gigantic, lumbering turtle", he continued: "the spectacularly madcap construction that [Radić] has erected on the Serpentine Gallery's lawn will certainly prompt many to find out more."

Writing for the Evening Standard, Robert Bevan said the building was both "a symbol of hope and something more mysterious".

"Radić has been inspired by the romantic architectural tradition of tumbledown follies in the landscape but his combination of a light upper form and heavy stones below turns what could have been a straightforward re-creation of a Neolithic monument into something vaguely alien and futuristic," he said.

Guardian critic Oliver Wainwright meanwhile branded it the "weirdest structure yet to have graced the west London lawn" and said it "looks like the site of a momentous pagan ritual".

The Serpentine Gallery Pavilion officially opens to the public on 26 June – find out more about the project in our earlier story.

Last year's pavilion was designed by Japanese architect Sou Fujimoto and comprised a cloud-like structure made from a lattice of steel poles. Other past commissions include Herzog & de Meuron, SANAA and Peter Zumthor.