News: a double-domed pavilion is the first building to have its main structure entirely made out of wooden panels created by robots, according to academics from the University of Stuttgart (+ slideshow).

The Landesgartenschau Exhibition Hall is made from 243 different plates of plywood that were created using a robotic off-site fabrication method.

The building is "the first to have its primary structure entirely made of robotically prefabricated beech plywood plate" according to the project team.

It was designed by academics from University of Stuttgart's Institute for Computational Design (ICD), Institute of Building Structures and Structural Design (ITDK) and Institute of Engineering Geodesy.

The insulation, waterproofing and cladding for the building were also digitally prefabricated, meaning the structure could be assembled in four weeks.

"We have developed a computational design process specifically for this project, that integrates aspects of our biological role model  – the sand dollar's plate structure and joints – as well as aspects of fabrication, construction and structural parameters," Krieg told Dezeen.

"Compared to classical approaches in architecture we like to call this an "informed design process", simply because as architects we develop our own design environment to make sure that the generated design is not only producible, but also structurally and architecturally performative," added Krieg.

The building is arranged in two spaces – an entrance area and an exhibition area with a large glass opening at the end framing views of the surrounding landscape. Each has its own domed ceiling made of convex polygonal beech plates and the two are connected by a narrower passage made of concave plates.

With an external surface area of 245 square metres, a floor space of 125 square metres and a height of 17 metres at its tallest point, the entire structure required just 12 cubic metres of beech. Off-cuts from the fabrication process were used to create the parquet flooring inside. 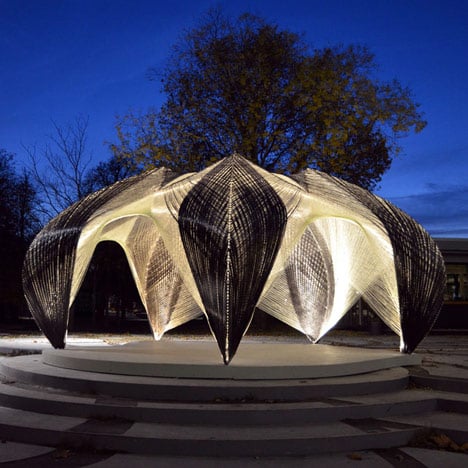 Research Pavilion by ICD and ITKE

A development of a design used for a pavilion built by a similar research team from the university in 2011, the building is modelled on the structure of a sea urchin's skeleton – or sand dollar – which was identified as one of the most efficient modular systems in nature.

Each of the 50-millimetre thick panels has a different design so that when put together they create a shell that needs no additional support.

"One of the most important challenges and innovations is the robotic fabrication of the 7,600 individual finger joints, which, through their interlocking connection, are the main reason for the building's structural stability," explained the team.

"Still visible in the building's interior, the finger joint connections resemble the sand dollar's microscopic connections and are only efficiently producible with a seven axis robotic fabrication setup."

A robot that is capable of drilling wood across multiple planes was used to create the panels – a process that would require a huge amount of time to complete manually but took just three weeks.

"The industrial robot's kinematic flexibility is an essential requirement for the production of such complex and individual geometries," said the team. "Consequently, the fact that, similar to the sand dollar's plate skeleton, all plywood plates are geometrically unique, poses no additional difficulties."

The shape of each panel was determined through a combination of computer-based simulations, which had the limitations of the fabrication robots programmed in to ensure that the pieces could actually be made.

"The development of the Exhibition Hall's complex plate structure is made possible through advanced computational design and simulation methods," explained the team. "Rather than drawing each plate manually, the plate's design space is incorporated into a simulation and optimisation process for automated form-finding, which includes parameters and constraints of robotic fabrication."

The Exhibition Hall was built with support from timber engineering specialists Müllerblaustein Holzbau GmbH, and is part of the biannual Landesgartenschau – an open gardens event.

"The development, fabrication and construction of the Landesgartenschau Exhibition Hall demonstrates that robotic fabrication in conjunction with computational design, simulation and surveying methods enable architects, structural engineers and timber manufacturers to work interdisciplinary as well as material and fabrication-oriented" said the team.

"This leads not only to resource efficient timber constructions but also to a novel and expressive architecture."

Last year academics from the ICD and ITKE collaborated with biologists from the University of Tübingen on a research pavilion created by a robot that was programmed to wind 60 kilometres of carbon and glass fibre filaments into a structure inspired by a lobster's exoskeleton.

Here is some project data from the University of Stuttgart: