Melbourne office Studio Four used light American oak for the built-in furniture at this home in Victoria, which has been refurbished and extended to make it fit for a growing family.

The outdoor spaces of Alfred Street Residence in Melbourne face south, attracting little direct sunlight, so Studio Four used a palette of white and pale timber to maximise brightness inside.

"We chose American oak because of its soft colour and uniform grain, and also because it was suitable for the combined kitchen island and dining bench," architect Sarah Henry told Dezeen. 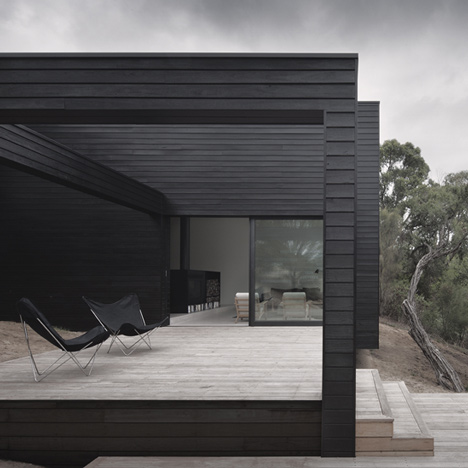 The occupants – a couple with two young children – asked Studio Four to refurbish and extend the Victorian house, which previously suffered from a cross-over of functions across its single storey. Bedrooms were at the front, a combined living-dining space was in the middle, and a kitchen, laundry, bathroom and study were at the back.

A two-storey extension at the back was added to make space for a kitchen-diner on the ground floor and two children's bedrooms and a bathroom above it. The living room remains in the centre of the house, and more private spaces – the master bedroom, bathroom and study – have been grouped at the front.

"The study, bedrooms and bathrooms have been zoned together into a private, secluded area, while the living, kitchen and dining areas are now connected to create one fluid space," explained Henry.

A new playroom next to the kitchen-diner provides space for the children, and cuts the outdoor space in half, creating two separate terraces – one at the back for outdoor dining, and an enclosed courtyard in the centre, next to the living room.

A wall of shelving surrounds the passage between the living room, which is in the older part of the house, with taller ceilings, and the kitchen-diner in the extension.

"One of the challenges was connecting the living area in the Victorian part of the house with the kitchen-diner in the extension, where there is a significant change in proportion and ceiling height," said Henry.

"The insertion of a timber book-wall between these spaces heightens the sense of moving through this transition."

The kitchen-diner features an island that extends into a dining table, with the dining area raised on a plinth to distinguish it as a more formal space. Storage cabinets have been kept at bench level to make this part of the house, which has limited width, feel bigger, and open shelves have been added to one wall.

To ensure the house continues to grow with the family, children's bedrooms have been fitted with storage for books and toys, which can be adapted to become study desks when they grow older, and the playroom has been designed as a flexible space that can be turned into a games room later.

"The redesign of the home has provided distinct areas for children, for work, for cooking and dining, and provides natural light and fresh air throughout, with views of courtyard gardens from all internal spaces," said Henry.

Here is some more information from Studio Four:

This project began as an existing single-level Victorian house in Prahran, Melbourne, comprised of a series of compartmentalised spaces, with some spaces hosting a number of functions.

With strategic re-planning of the ground floor, and the addition of a new first floor, the realised design enables more flexibility to adapt each space to suit the ever-changing dynamics of family life.

A clear delineation of function on the ground floor is achieved through the insertion of new built forms, both in horizontal and vertical planes. With subtle changes in floor and ceiling levels, and the introduction of new joinery elements and controlled openings, each space becomes further defined.

The interior of the house was given stronger connection to the exterior courtyards through a series of concealed sliding doors, increasing access to light, fresh air and aspect. While a rear courtyard was connected to the kitchen and was designed for outdoor dining, an interior courtyard provides a green backdrop and an apparent extension of space to the living room.

Arriving at the house, it is difficult to gain more than a glimpse of the first floor addition through the surrounding urban streetscape. The upper volume is consciously set back from the ornate Victorian chimney, while the fully glazed facade provides a reflective backdrop and contrasts the period roof detailing adjacent.

This design strategy allowed the first floor spaces to be exposed to varying levels of interaction with the landscape, both immediate from the tree tops of the birches from the courtyards below, to the expansive cityscape views beyond, whilst maintaining a level of visual privacy from the adjacent apartments.

Throughout the interior, a restrained material palette of white with pale timber insertions provides a neutral backdrop for the family's collection of art, books and objects.