Slovenian firm 3biro Arhitekti designed underground rooms and cantilevers to create the impression that this family house "only slightly touches the sloping terrain".

Located in Škofja Loka, north-west of Ljubljana, the three-storey House in Groharjevo was designed by 3biro Arhitekti for a family of four who originally only approached the firm to relocate the windows on an already approved plan.

"They had bought a plot package, including standard house plans with a building permit," 3biro Arhitekti told Dezeen. "However, we introduced our vision of their house and of course they were fascinated since it was tailored to them." 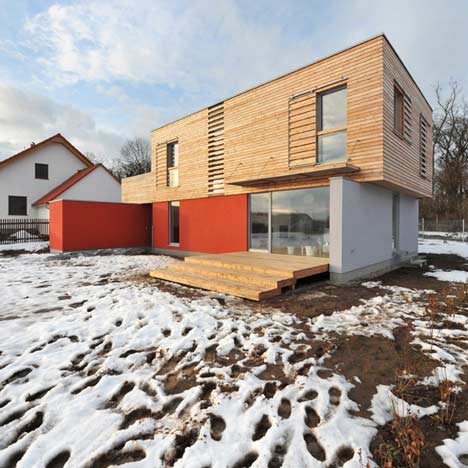 House on the outskirts of Prague by Martin Cenek

The architects designed an angular building that utilises the slope of the landscape, creating two ground-level storeys that both open out to sheltered outdoor areas.

The lowest level is largely sunken underground and leads out to a secluded terrace sheltered beneath the cantilever created by the two storeys above. A second cantilever is created by the uppermost floor, sheltering the house's main entrance alongside a parking space.

"Based on the specifics of the given site – its sloping terrain and the dense settlement surroundings, and the desire for as much outside area as possible – the result is non-classical. It seems that the house only slightly touches the sloping terrain," said the team.

The base of the building was constructed from reinforced concrete, but the upper sections were built with a timber framework.

"The decision to use wood as the structural material was because of the speed and cleanliness of construction as well as sustainable reasons - Slovenia is rich with woods and living in a wooden house is pleasant," added the studio.

Most of the outer walls are clad with timber, although the two side walls are covered in a rainscreen of corrugated fibre-cement that wraps around from the roof.

The team explained: "The north and south facades are clad with wood and have large windows towards the beautiful views, but facades on the east and west are as closed as possible – the material is the same as the roof and it protects from the neighbouring houses."

A large living and dining room occupies the majority of the houses's middle floor and features double-height spaces at both ends, creating generously sized windows overlooking the landscape.

A central staircase leads up to three bedroom and two bathrooms on the top floor, while the lowest level accommodates an office and showroom for one of the clients, who works as an engineer.

"The biggest challenge in the project was how to make the building with the smallest footprint and in that way leaving the most of the plot green, unbuilt and open," added the architects. "With two overhangs, the result is a 180-square-metre house with a 33-square-metre footprint."