The Drone Aviary project's sponsor Swarovski released a statement today saying that the project has been axed over concerns for "safety of members of the public in close proximity to the drones". 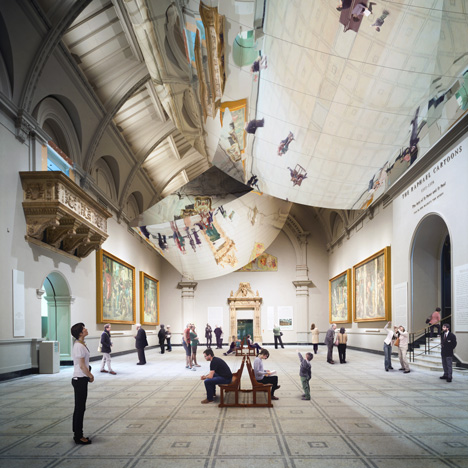 London Design Festival 2014 to include spinning sculptures and drones

Drone Aviary was conceived by design studio Superflux as a chance for the public to interact with the flying machines, which are increasingly being used for tasks ranging from delivering books to assisting military operations.

Covered in Swarovski crystals, the drones were to hover around the V&A museum's John Madejski Garden during London Design Festival 2014.

"This would have been the first time that drone technology has interacted with the public in a museum setting," said Swarovski's statement.

"Swarovski continues to support cutting-edge projects as part of its ongoing programme to promote design and innovation and remains a committed partner of the London Design Festival."

The project was announced as one of a series of events to take place at the Museum during the annual design festival, along with a rotating sculpture by Barber and Osgerby and a garden installation by Zaha Hadid.

Last year, the museum hosted a giant chandelier of colourful glass spheres in the main hall and 5,000 spinning paper windmills in a doorway. It also exhibited the first 3D-printed gun, which was acquired just before the event. See our coverage of London Design Festival 2013 »

This year's London Design Festival will take place from 13 to 21 September.