Researchers at the Max Planck Institute have developed a robotic four-legged dog that uses an algorithm to learn to walk from scratch "like a baby giraffe".

The four-kilogram robot is being used to help researchers at the German institution Max Planck Institute (MPI) better under how animals learn to walk and learn from mistakes such as stumbling in the wild.

"The general concept behind Morti is to model blueprints we find in biomechanics and neurocontrol in animals and transfer them to a robotic platform," said MPI research student Felix Ruppert.

"There, we can investigate them closely and in ways that would not be possible in nature since we wouldn't have access to those insights," Ruppert told Dezeen.

According to Ruppert, the same reflexive neurological processes that humans and animals rely on for tasks such as walking, blinking or digestion are applied to Morti.

While in humans and animals these processes are controlled by the central nervous system (CNS) in their spines, in the robot they are controlled via a computer program called a Central Pattern Generator (CPG).

When walking on a flat surface, baby animals can rely only on these reflexes to walk. However when they walk across bumpy terrain, they learn how to stable themselves and avoid falling.

In a similar way, the CPG learns to optimise the robot's movement in real-time via feedback from sensors attached to the robot's feet. The CPG continuously compares the expected and the sent sensor information to help the robot correct mistakes.

"When Morti starts to learn, it does not know how to walk yet, just like a baby giraffe," Ruppert said. "Morti's controller is 'blind' and just swings its legs back and forth."

"Just like humans, the robot has reflexes that prevent it from stumbling. Over time we measure how often the robot stumbles," he added.

"The learning algorithm then tries to change the way the legs swing so that the robot does not stumble anymore." 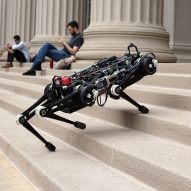 MIT's blind Cheetah 3 robot can navigate without sensors or cameras

When the researchers initially placed the robot on a treadmill to test it, it began slipping and sliding along as it walked.

The researchers found that when Morti tripped, the learning algorithm made adjustments, such as how far the legs swung back and forward, whether its feet hit the ground correctly, how fast the legs moved and how long the legs were left on the ground.

According to Ruppert, after just an hour it had learned how to walk without falling or tripping up.

Ruppert hopes that the results of the study will help broaden the current thinking between robotics and biology.

"The study investigates how we can look at learning in robotics and in nature from a different, more intrinsic perspective," explained Ruppert.

"Rather than tell the robot to go far or fast we encourage the robot to use its legs to the best of its abilities," he continued.

"Because it is very hard to quantify what is good locomotion, it is also hard to make a robot learn since we do not know how to measure good behavior but our study provides a new angle on how it might be possible to formulate and achieve good locomotion behavior."

Morti is not the only robot modelled on an animal.

German automotive company Continental unveiled plans to use dog-like robots to deliver packages while engineers at the Massachusetts Institute of Technology developed a cheetah robot that moves by feeling, without the need for sensors and cameras.

The images and video courtesy of Felix Ruppert/Dynamic Locomotion Group.