A collective of emerging Italian designers has worked with artisans to create a range of terracotta objects (+ slideshow).

Each of the 10 designers in the Federazione Italiana del Design (FID) group teamed up with an artisan to create a simple object for everyday use from terracotta: a material closely linked with Italian culture.

Participants were free to add other materials, as long as the terracotta featured prominently.

"Terracotta is a very strong element in the culture of Mediterranean countries," Terracotta Everyday participant Marta Polenghi told Dezeen. "In every Italian home there is a vase, or a pot or a table crafted by terracotta artisans. We decided to pay homage to this material and the crafts surrounding it by dedicating a whole exhibition to it." 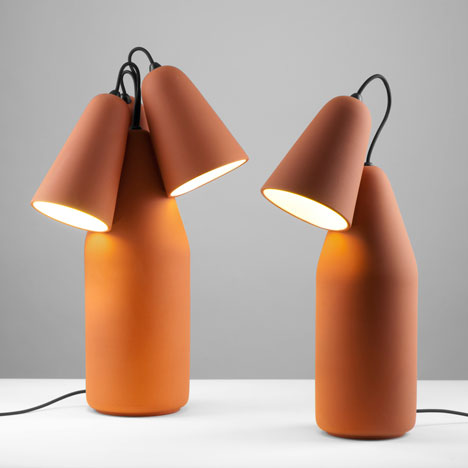 "It has been really interesting to work with: it's a very alive material that needs to be known well in order to foresee the final result," she continued. "These constraints force designers to set up a dialogue with craftsmen."

Chimneys, designed by Marta Polenghi and made by La Castellamonte, is a set of outdoor stools made from weather-resistant terracotta with red latex to protect the base and a rope handle for carrying them.

"I lived in Paris for two years and was always fascinated by the terracotta chimneys decorating the roofs," said Polenghi. "We used to climb up on the roof of my apartment and sit on the chimneys to enjoy the view. I thought I could use the same shape and material and transform it into a stool for the garden."

Daniele Bortotto designed Cooler, an outer container made of partially glazed terracotta and a slightly taller inner container made of copper. Placing ice between the two containers keeps the contents cool and fresh. This product was crafted by Luigi Bertolin of Ceramiche 3B.

Laboratorio San Rocco made the Lampada table lamps, designed by Martina Bartoli. The lamps comprise two curves of terracotta, glazed in white on the inside to reflect the light. "They aim to explore the volumes of material and light," said Bartoli.

Line by Francesca Sciarmella is a side table with geometric steel legs in white and a terracotta plate made from three detachable parts that can also be used as trays. It was realised by Manifatture Sottosasso.

"In my parents' house we have a terracotta table with metal legs, as in many Italian homes, where we often eat together," said Sciarmella. "I wanted to take the idea of eating together and incorporate a removable section, which can be placed in the middle of the table as a platter or a tray."

The Portuguese Stove by Jacopo Sarzi is a redesign of a traditional Portuguese cooking tool used to cook meat and fish, comprising a terracotta dish with a perforated metal lid grill. It was made by Stephanie Sommet.

Jacopo Ferrari designed Squeezer, made by Maria Luisa Tribolo in two terracotta parts with a coloured rubber gasket, echoing the design of plastic citrus fruit squeezers found in kitchens around the world. The upper part is unglazed so that it slowly absorbs the flavour of the fruit.

"Every time someone squeezes an orange in my home, its flavour lingers in the air for some minutes. The properties of unglazed terracotta led me to design a squeezer that absorbs and slowly releases the orange flavour," Ferrari told Dezeen. "Apart from that, I tried to design a modest object that would let the beauty of the terracotta stand out."

Tanque are partially glazed terracotta basins designed by Rui Pereira to be used as vases or aquariums. They feature an internal grid, a removable cork for drainage, and a plinth-like base in granite or Azores pine wood. They were made by Irmãos Regas and Manuel Rêga.

"Tanque was inspired by Milanese street vendors. Every week there is a market on my studio's street and it is amazing to see how vendors create and develop their own stands in order to exhibit fruit and flower, fish and meat," said Pereira. "With this piece I want to freeze this ready-made attitude, paying an homage to the creativity and low use of resources of this men, in order to create functional objects."

Giorgia Zanellato's Tegola fruit bowl is made from extruded terracotta in a question mark-shaped profile, resulting in an unusual form in which fruit is displayed in one long line. Tegola was made by Ceramiche Milesi.

Terracotta Everyday was exhibited at Superstudio Più during Milan design week in April, marking FID's first participation in the event. The project will appear again at Paris Design Week in September.