An architecture graduate from the University of Westminster has designed a temporary plywood "temple" for the Burning Man festival in Nevada's Black Rock Desert.

The Hayam Sun Temple is a development from a project Josh Haywood worked on during his degree programme at Westminster.  It will be built as a pavilion for the notorious festival, which will see 70,000 people descend on an area of desert to construct a temporary city complete with art installations and music performances. 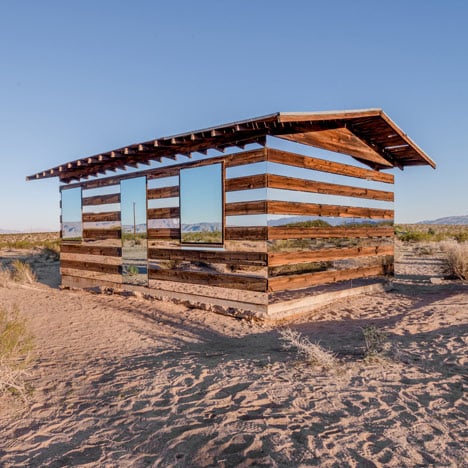 Intended to act as a "spiritual" resting place for festival-goers and a shelter from the strong sun of the site, the structure will stand on site for the duration of the festival from August 25 to September 1.

Perforations in the wood and arched columns and indents are "the product of extensive research into Islamic geometry as found in the Allhambra and Alcazars of spain and the parametric digitalisation of these geometries," explained Haywood.

During the day the patterns punched into the wood will cast shadows on the ground, while at night, each of the pillars of structure will be lit up from within.

"In terms of build schedule, time is very tight as the festival starts on August 25th and we have to coordinate everything so that we can prefabricate, construct, and transport the piece to site all after our arrival in the states," Haywood told Dezeen.

The rules of the festival mean that the pavilion had to be designed to resist the harsh conditions of the site, where winds often reach speeds of up to 60 miles per hour and can carry away unsecured structures, without foundations.

"Designing for Burning Man poses a number of unusual challenges," said Haywood. "There are strict rules set out in the festival's 'Ten Principles'. The foremost of these when constructing is 'leave no trace'."

"This means that after the festival there must be no evidence that we were ever there, down to the last screw, nail and wood chip," said Haywood. "This also means that no large holes can be dug into the earth which creates challenges when designing the structural strategy."

Haywood has assembled a team of London-based advisors and designers to help him realise the project and has received a grant that is provided annually to a handful of projects by the organisers of the Burning Man festival. He is seeking further funding on Kickstarter.

"While I was at university one of my projects focused on creating an installation for Burning Man and as part of this I applied for the grant, although it is worth mentioning that Westminster University have no involvement with the project, it is just something that started while I was still studying there," said Haywood.