Wilcox's concept is based on the idea that, in a future where cars are fully automated, the safety features such as air bags and crumple zones that largely determine the form of vehicles today will become redundant, freeing up designers to create radically different car designs.

"In the future it will be safer to drive in a driverless car than it will in a manual car," says Wilcox. "Therefore we don't need the protection systems that are built into contemporary cars. We can just have a shell of any design."

He adds: "It's a sort of sleeper car, so you can actually just lie down, read a book or go to sleep and the car will take you to your destination."

Wilcox says he was inspired by a recent trip to Durham Cathedral.

"I was really struck by the stained glass windows," he explains. "I thought, 'Why don't we use that so much in contemporary design?' So I'm learning a bit about glass making and working out how on earth does one make a stained-glass car of the future?" 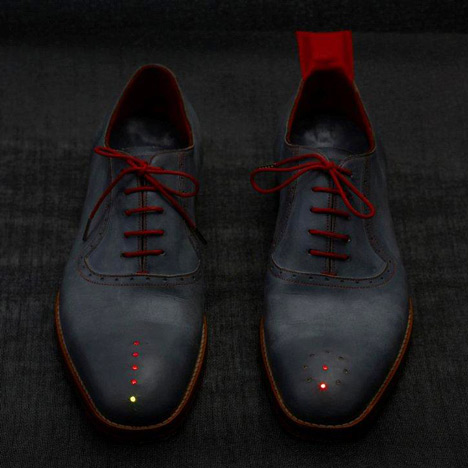 No Place Like Home GPS shoes by Dominic Wilcox

In 2012 he worked with traditional shoe-makers in Northampton to produced a pair of GPS-enabled shoes that can guide the wearer home. A ring of LEDs in the toe of the left shoe points the wearer in the right direction, while those on the right toe show the journey's progress.

"These shoes were inspired by the Wizard of Oz and Dorothy, who wears those ruby red slippers and when she clicks her heels together she gets taken back to Kansas," he explains. "I am interested in technology in that it is the closest thing to magic, so creating a surprise, something that makes you go "wow!" I'm not interested in approaching it from a techie perspective."

At the beginning of this year Wilcox also produced a series of odd inventions from his collection of surreal drawings, called Variations on Normal, for London department store Selfridges.

Objects included a porcelain tea-cup with an added cooling fan and binoculars that allow you to see into the past or future. 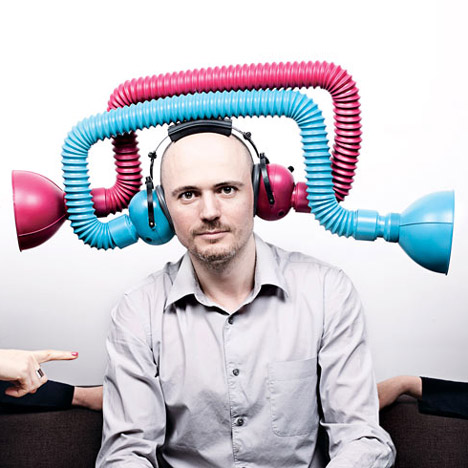 "They are a sort of fictional design object," he says. "I like making objects that are like props in a story that hasn't been written."