The age-defining rings of a tree stump provided the starting point for this small round house planned by design collective Penda for a wood-carving artist in Beijing (+ slideshow).

Named House O, in reference to its circular shape, the house is designed by Penda to provide the client with both a home and a workspace, tailored precisely to suit his day-to-day routine.

"The daily routine of the artist is, in a very direct way, translated into the program of the house, which expresses its outer appearance as well," explained studio co-founder and architect Chris Precht, whose past projects include a gallery filled with topsy-turvy openings. 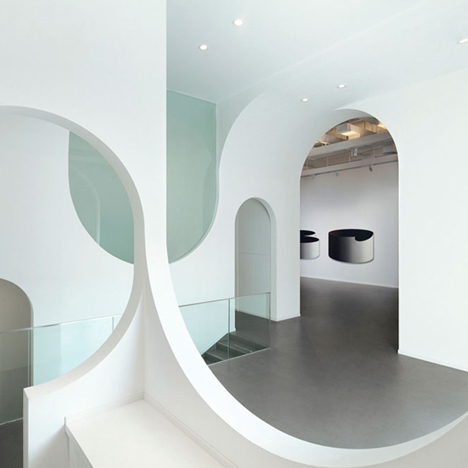 Already under construction and due to complete early next year, the two-storey building will feature a central courtyard, creating a doughnut-shaped plan that arches upwards along one edge.

The lowest level of the building will be submerged underground. A staircase wrapping the courtyard will connect the two storeys, which trace a route through the occupant's daily activities.

"The circulation and the program is arranged along a spiral, leading from a basement with a breakfast area to the highest level, which contains a bedroom," said Precht.

The arched edge will help to bring natural light down into the basement, and also raises the bedroom up half a storey above the ground-floor living room.

"The lifted part faces toward the south and inhabits the master bedroom, offering a great view over the yard," added the architect.

The house will be located on a newly defined plot in the garden of an existing property. Exterior walls will be glazed, screened behind wooden louvres that protect the interior from direct sunlight.

A hedge is also proposed around the perimeter of the building, offering an extra degree of privacy.