Polish designer Patrycja Domanska and Vienna designer Felix Gieselmann collaborated to create this satellite-shaped lamp that can be used in four different ways.

The Magnum lamp is made from two pieces: a matte black powder-coated aluminium rod attached at one end to a cable and a luminous acrylic disc with a shorter rod that slots through its centre.

Either end of the second rod can be attached to the first using a conductive magnetic plug, which was adapted from the automotive industry. 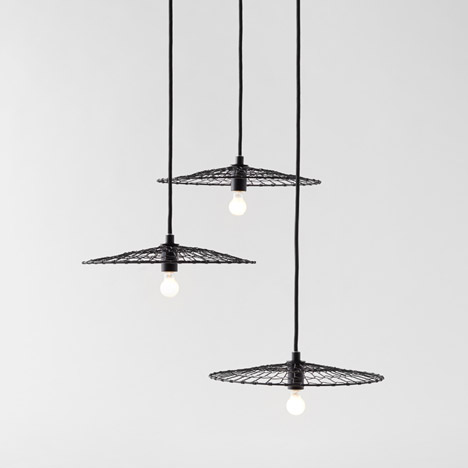 Patrycja Domanska and Felix Gieselmann's lamp can be hung from the ceiling with the lit side of the disc facing up or down.

Alternatively, it can be laid on a flat surface to create a table light reminiscent of an idle spinning top.

The luminescent surface of the disc can either point up into the room or down towards the surface the lamp is resting on.

"We wanted to create a lamp that would allow the user to change the direction of the light effortlessly and intuitively, but also a design that worked from a purely sculptural point of view," Gieselmann told Dezeen.

"The form references satellites and space stations because we liked the metaphor of an object that somehow surrounds you and adapts to your needs, without being too dominant."

Designed in response to a brief to "create a new object that is relevant to the living environment and helps us improve daily life," the Magnum light is one of twenty winners in the Objects category for the 2014 Interieur Awards

The winners were announced ahead of the Biennale Interieur event taking place this October in Kortrijk, Belgium.